You Gotta Be Crazy to Work For Trump 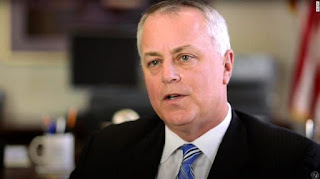 I'm not exaggerating. This guy is effing crazy:


The White House's nominee for a top Pentagon post repeatedly spread conspiracy theories that a former CIA director tried to overthrow President Donald Trump and even have him assassinated in newly discovered comments from radio and television appearances as well as on social media.

Retired Army Brig. Gen. Anthony Tata, who was nominated to become the under secretary of defense for policy at the Department of Defense, promoted conspiracy theories that John Brennan, the former CIA director, wanted to oust Trump from office, and pushed a bogus conspiracy theory that Brennan sent a coded tweet to order the assassination of Trump in 2018.

CNN's KFile reviewed dozens of Tata's radio and television appearances and found that he also spread conspiracy theories that a "deep state cabal" of officials would rather see Trump fail than succeed in office, a sentiment echoed by the President and his allies, using extreme rhetoric. Tata also said then-President Barack Obama and first lady Michelle Obama engaged in "borderline treasonous" behavior by expressing their dismay over a Trump presidency during the transition period.

How did he even make it to General? Did they feel sorry for him? Was this how they helped him transition to the civilian world? Here's a pity star for you, now go.

There's no one left who will work for Trump. That's how his "second term" will look, if there is one. We will be seven years into a Trump presidency and the only people who will work for him will be the absolute crazies who drool and dance around at his rallies, not understanding the world around them. They're the ones in the dirty t-shirts who lost their MAGA hat when they vaulted over the chain link fence because they didn't know where the gate was.

I'm convinced that this is why he'll end up serving five or six presidential terms--there are too many unemployable people in this country whose only real shot at a job is wrapped up in making sure Trump is never thrown out of office. You better vote or this guy Tata is going to end up Vice President some day.