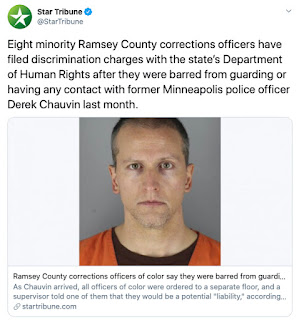 This is an incredible story, and the reporting here is worthy of awards and praise:

Eight minority Ramsey County corrections officers have filed discrimination charges with the state’s Department of Human Rights after they were barred from guarding or having any other contact with former Minneapolis police officer Derek Chauvin last month.

Chauvin was booked at the county jail the same day he was charged with third-degree murder and manslaughter in the death of George Floyd.

As Chauvin arrived, all officers of color were ordered to a separate floor, and a supervisor told one of them that, because of their race, they would be a potential “liability” around Chauvin, according a copy of racial discrimination charges obtained by the Star Tribune.

“I understood that the decision to segregate us had been made because we could not be trusted to carry out our work responsibilities professionally around the high-profile inmate — solely because of the color of our skin,” wrote one acting sergeant, who is black. “I am not aware of a similar situation where white officers were segregated from an inmate.”

Here you have a situation where, because of the notoriety of the prisoner, a decision was made to segregate him from prisoners and guards.  Think about that for a moment. They decided to keep Chauvin in a different county altogether. The crime he is accused of was committed in Minneapolis, which is in Hennepin County. Ramsey County, where they decided to jail him, is the next county over.
The decision was based on bigotry and nothing more. They put all of the minority guards on a different floor from Chauvin and then they tried to cover it up.
I feel like I don't know what country I live in anymore. Is this America? Because I can't fucking tell anymore. I really can't.
This is just an amazing detail as well:

On May 30, multiple officers reported seeing surveillance footage of a white lieutenant who was granted special access to Chauvin’s cell, where she sat on his bunk and allowed him to use her cellphone — a significant policy violation.

The cover-up continues, and the damage that has been done to this institution is devastating.

The Sheriff’s Office declined to comment on that allegation. Chauvin was moved to the Hennepin County jail on May 31 and for security reasons transferred again to the Oak Park Heights maximum security prison, where he remains.

Nearly a week after the initial incident, dozens of jailers met with Sheriff Bob Fletcher and elected an acting sergeant to read a two-page letter on the behalf of the minority staff. The note recalled his confrontation with Lydon, the shock he felt upon being called “a liability” around Chauvin and the command to notify other officers of color that they were being reassigned to a different floor.

“I immediately left feeling sick to my stomach,” the letter states. “The hurt and anger these officers displayed was evident not only in their body language, but in their voice.”

The sergeant went on to explain that the order caused division among the ranks and cast doubt on the professionalism of even veteran officers. He did not request Lydon’s termination, but said his judgment “caused us officers to lose faith in his ability to run this facility.”

All of this just leaves me speechless. What can you even do to comprehend how insane all this is? White privilege is real, and this is what it looks like.