Trump and His Goons Stole All That Money 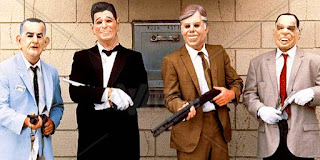 Catherine Rampell of The Washington Post is one of the most important writers in America, and she asks a very important question about what Trump and Mnuchin did with your money.

What are they hiding?

That’s the question taxpayers should be asking as the Trump administration refuses to reveal where a half-trillion dollars of our hard-earned cash has gone.

In March, back when Congress was rushing to provide more coronavirus relief, lawmakers passed an unprecedented $2 trillion bill known as the Cares Act. After initially fighting to prevent any meaningful oversight of the bailout programs it would administer — at one point even demanding a few-strings-attached Treasury slush fund — the Trump administration eventually agreed to several major oversight and disclosure measures. Senior officials, including Treasury Secretary Steven Mnuchin, repeatedly pledged “full transparency on anything we do.”

Since then, the administration has worked to sabotage virtually all of these accountability mechanisms. While paying lip service to “transparency,” it has fired, demoted or otherwise kneecapped inspectors general, some of whom recently wroteto congressional leaders warning of systematic efforts to avoid scrutiny required by law. The watchdog Government Accountability Office also complained that the administration has refused to provide critical data on the bailout.

We are inventing new ways to talk about how a third-rate mobster like Trump can get away with stealing money from the government and shoving it into the pants of his buddies. A phrase like "sabotage virtually all of these accountability mechanisms" is just a polite way of saying, "look the other way while we rob this bank."
Literally. They have stolen your money. Trump and his buddies walked off with it, and that's the simple truth.
And what's funny is that, in about six months, there will be "no money" for President Biden to spend on repairing the economy. There will be "no money" anywhere and we have to CUT SPENDING and CUT ENTITLEMENTS and FIX THE DEFICIT that Trump created.
The GOP will suddenly become the party of responsible governance and the only mature adult in the room when it comes to fiscal discipline. Writers like Rampell are smart enough to tell us how they will have zero credibility when it happens, and I am hoping we can continue to get this sort of analysis and commentary from a major American newspaper. The problem is, there are a hundred hacks out there who are going to repeat the Republican talking points about how WE ARE BROKE and OH MY GOD YOU HAVE TO SLASH BENEFITS FOR THE POOR and that's all you're going to hear during Biden's first term in office.
Don't fall for any of it. We need to spend money to save American jobs and we need to feed people when Trump is thrown out of office. We need to raise taxes on the wealthy to pay for it. That's the only sane path forward.
on June 16, 2020