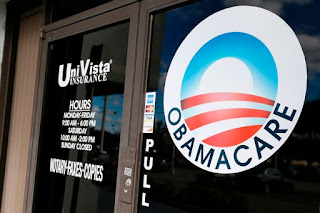 Republicans want more Americans to go without health care and that's all there is to it:

In the midst of a global pandemic with the presidential election just months away, the Justice Department asked the Supreme Court on Thursday to invalidate the Affordable Care Act, the landmark health care law that enabled millions of Americans to get insurance coverage and that remains in effect despite the pending legal challenge.

In a late-night filing, Solicitor General Noel Francisco said that once the law's individual coverage mandate and two key provisions are invalidated, "the remainder of the ACA should not be allowed to remain in effect."

The justices will hear arguments in the case sometime next term, although it is unclear if they will occur before the November election.

This is a relentless assault on decency. If, by some miracle, they were to "invalidate" the ACA, would anybody even notice? Would we finally see some realization in this country that all the GOP wants is for Americans to go without health care and die needlessly?

Everything we're seeing is a last-ditch run at whatever still works. The Republican Party wants to wreck everything so that they can sit back and say, "government doesn't work!" That's how they're going to survive the next decade or so--they'll leave the country in ruins so they can criticize every Democrat who tries to put things right.

I can't even with these people anymore. It's an evil thing to do, leaving people without the care they need. It's deliberate and direct. It's a constant assault on trying to do the right thing for people.
on June 26, 2020