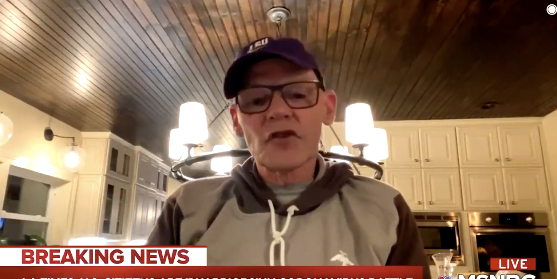 James Carville rightly points out that the Trump Re-election campaign is largely a useless exercise now that the bottom has completely fallen out of the economy. There is virtually no chance a president with 25% unemployment could get re-elected in our modern political system. That's not to say that it isn't possible, but Carville is right to point out that it is far too steep of a hill for someone like Trump to climb.

Look what his campaign is doing. They’re a pack of grifters. His campaign manager got two condos, a Ferrari, a yacht, a Range Rover and they’re all just fleecing the campaign. This is all about making money and they’re going in there and giving him fake polls.


How do you make the case that Trump should be re-elected when jobs have disappeared and when the country has been battered by coronavirus largely because his incompetent administration is too busy stealing everything to do anything for the American people? The Republicans in the Senate probably want to do more for the working class. However, they know the game is up. Virtually every vulnerable Senator up for re-election is under water with the voters in their home state. Some, like Cory Gardner and Martha McSally are already looking for lobbying gigs because the math is working against them.

Americans are suffering like they haven't suffered in three or four generations. The fear, the uncertainty and the hardships ahead are going to break people. If you don't already have sympathy for those who are going to lose their loved ones, think of the kids that are going to be asked to live through the years ahead. These experiences shape the American conscience and make activists and crusaders out of individuals who would otherwise have grown up without looking for a cause of their own. There will be nothing ordinary about how they remember these days and what they do from now on. You have kids who are laying the groundwork right now for fifty or sixty years of making sure Trump never happens again.

Don't tell me this is going to pass and allow everyone to go back to "normal."

Normal ain't coming back, at least not in the way we remember it.

Normal has been sold out of the trunk of some weasel's car, and anyone working for Jared Kushner right now should understand that prison attire is in their future.

You have jackasses like Mitch Daniels saying that we should avoid the partisan blame game. Hello, that's wrong. When we face a crisis, holding leaders accountable is the American way. People rewarded President Obama with a second term precisely because he carried himself with dignity and worked every single day to make things better. We forget to appreciate the fact that he did so in the face of apathy from Democratic Party voters, a hostile Republican Congress that refused to do anything to make the lives of average Americans better, and the kind of sickening racism that could only have produced Donald Trump.

Hold on and prepare for a shit storm ahead. Crawl over broken glass to vote in November. Change the control of the Senate, give Nancy more members of Congress, and throw Trump out on his ass. Believe me when I tell you this, there are hundreds and hundreds of prosecutors waiting for the call. Every single one of them who worked in the Obama, Clinton, and even Bush administrations are going to be asked to help with the reckoning ahead.

But let's revisit what Carville had to say about Brad Parscale, the kid who Trump will likely fire soon because he's been making too much money and doing nothing to break through to the voters. Parscale is stealing so much of Trump's money that it isn't even funny. Much of it is probably already overseas, and Parscale probably has one hell of a bug out plan when everything goes south. Hell, he's going to need it.
on May 07, 2020