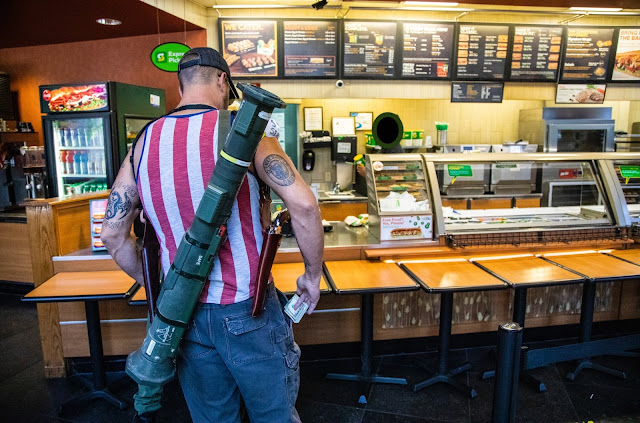 This photo was taken today somewhere in Virginia. It's a picture of a classically attired stumblebum demonstrating his rights under the U.S. Constitution in a way that looks as ridiculous as it seems.

I will heap scorn and abuse on this individual because it is reckless, irresponsible, and childish to display such a weapon in a public place. In the United States of America, we do not do this. We don't do this in front of old women and young children. We do not do this in front of other Americans. We do not brandish weapons of war because this country prefers peace and the scenes of calm and tranquility. The fetishization of war implements is a pop culture phenomenon. We might put an old cannon up in front of the VFW or whatever but we do not do ostentatious displays of military power. That's the goddamned Russians, son. That's banana republic bullshit.

Given that there is no threat to this man with regards to his life, liberty or property, the fact that he is open carrying an AT-4 rocket launcher represents failure.

A failure to understand that he does not need to carry this weapon.

A failure to understand that he doesn't need to carry any weapons because this is America, you jackass. You're out and about, run your errands and go home, like a normal person.

A failure to understand that carrying what is most likely a dormant AT-4 used for training purposes (I believe it's the one where you can load a .556mm tracer round in the rear adapter and fire that through the weapon) is absolutely fucking insane.

A failure to comprehend the greater good, which is encapsulated in the idea that we should do what we can as a country to stop the spread of the COVID-19 virus. Put on a mask and act like an adult.

I mean, it's the embodiment of failure all the way around. What a dumb fuck. What a stupid country. What a terrible time to be an American.

He's not accomplishing anything. He's ordering Subway. He's carrying oversized pistols like a movie character. he's strutting around in a tank top. He's not even in possession of a wallet like a normal man.

Good God, what a shithole country this is. Are there no wallet stores anymore?

And I know, I know. There have always been nut jobs like this in our midst. Every town has a chucklehead like this guy in it. I get that.

The transformation of this country into a place where these cosplaying dipshits are able to walk around like this is certainly a success for the Russians who wanted to divide America into warring camps, but even they can't believe how lucky they were to pull it off.

When you see a man looking like this, know that it is because of our failure to find the better path forward. We are going to pay for this for a long, long time.
on May 10, 2020