All the People Who Did Not Need to Die 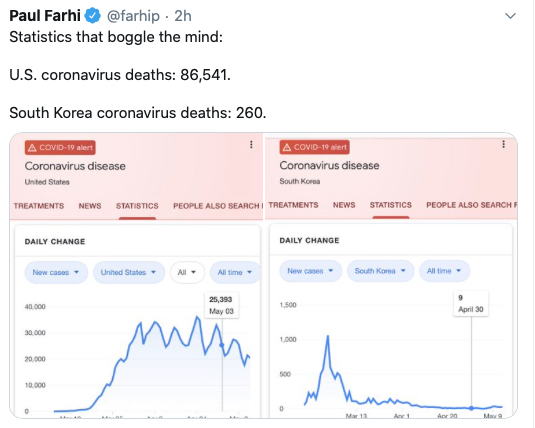 A comparison of deaths between the United States and South Korea is a way to frame the debate as to what's happening in this country right now.

We are witnessing one of the greatest crimes of neglect and incompetence in American history. Tens of thousands of Americans have died because the Trump Regime did not properly develop a way to deal with the COVID-19 pandemic. It was not a matter of making overly cautious decisions that did not pan out. It was not a matter of moving resources to the wrong place or of making a choice between two different paths.

Trump turned to the worst possible people in America and empowered them to deal with the crisis.

They worried about the stock market instead.

They realized their error and then moved to enrich people "friendly" to Trump's re-election.

This failure of leadership abandoned the idea of acting for the common good and replaced it with a brokedick version of disaster capitalism.

All those people did not need to die. They could have been saved. If there had been someone, anyone in January willing to marshal the resources of this country, shut things down, and move to a strategy of testing and contact tracing people, an untold number of Americans could have been saved.

Trump did the opposite.

At every juncture, he went with the worst possible choice and the bodies piled up.

Trump fired the professionals who could have helped. He switched out people who were competent and replaced them with children. He got rid of his Acting Chief of Staff and brought in a bawling sycophant. He listened to his worthless son in law and he ignored common sense advice. He watched his own friend die, and that's saying something because it is hard to imagine Trump ever having a friend. Let's call the wealthy acquaintance of his in New York something more human, such as a former associate of the criminal occupying the White House. He has fired Inspector Generals and relieved people who know how to make things work. He has berated those who could have helped and acted like a toadying jackass in front of a bunch of clueless businessmen.

His briefings confused the American people, empowered an untold number of defiant buffoons, and left the public uninformed and adrift. He has complained more about how this has affected him than he has ever expressed condolences to the people who lost family members. It has been a non-stop pity party for the president of butt-hurt feelings and pathetic self-aggrandizement.

If someone were to tell you what the 2020 election should turn on, it should be a referendum on Trump's inability to lead the country and tell the goddamned truth.