A Failure to Lead 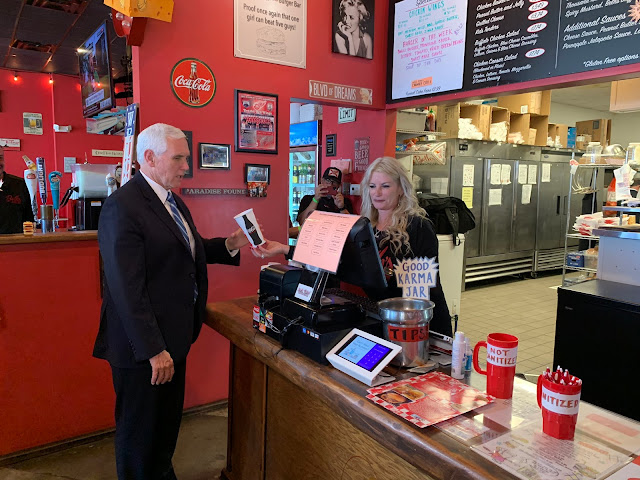 Here's the Vice President of the United States of America, out and about during a global pandemic, ordering food in a restaurant that is half-assing its way into oblivion.

Not only is this irresponsible and reckless and a demonstration of Pence's incompetence, it's also ridiculous to the nth degree. There are almost 100,000 dead Americans who would love to be eating out today, but because of Pence and his boss, they'll never get that chance. There are countless Americans who are wearing masks and staying home and doing the right thing. Pence has set such a poor example for them that you can't help but wonder how much more crazy people will get when they go out into public places and run into any kind of pushback for failing to wear a mask.

It's nonsensical to expect any of them to "get it." They won't perform the mental gymnastics necessary to understand the need to sacrifice something personal for the common good. They won't arrive at a common sense moment, ever. You don't wear the mask for yourself. You wear it to minimize the possibility of infecting someone else. That's because the experts have told us that this is one way to return to social interaction with some degree of safety.

Fuck it, they say. No egghead is going to tell me what to do! And then they drown in their own liquified, blood-soaked lungs. Down comes the curtain! No learning necessary. On to the next human tragedy.

The default setting for those who take their cue from Pence is, "I will do whatever I want and fuck you if you die because I'm not giving up my freedom."