You Have to Be Insane to Support Trump 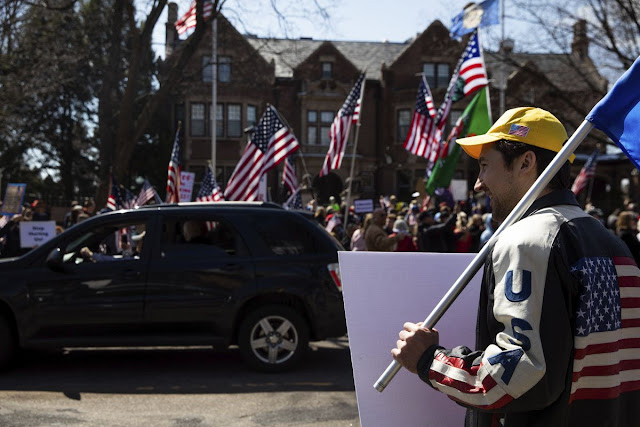 Protests around the country have erupted because a handful of snowflakes don't believe in science and want to reopen everything before there is a way to protect people against COVID-19:


With new guidelines from the federal government, some governors have rolled out plans to begin lifting measures in place battling the spread of the coronavirus -- but other officials say it's still too early.

In Florida, residents flocked to Jacksonville beaches after officials announced a soft opening Friday night allowing for recreational activities for several hours each day. In Texas and Minnesota, state leaders announced they'd be lifting some of the measures in place in the coming days -- still requiring residents to keep a distance and avoid big crowds.

But some health experts and medical groups have warned the US is still behind in its testing capacity -- a key factor in the country's reopening process to help determine and track just how many people are infected.

It can't be because these people know something that we don't because they don't appear to comprehend a goddamned thing. And this comes at no cost to Trump because he has convinced the people who follow him that their deaths are worth the economic boost that a handful of millionaires are counting on to restore their stock portfolios.

This is greed at work. This is what Trump will do to hold onto power. There is no decency in any of this. It is a purely craven madness.

Reopening the country puts liberals on the defensive. We can't let people do something that will lead to their deaths. We can't let public safety suffer, nor can we risk the possibility that it a premature reopening will threaten hospital capacity, endanger the lives of first responders, and spread the virus through our population of vulnerable individuals. It's a particularly heartless move on Trump's behalf. The willingness to sacrifice human beings for propping up the economy and helping his re-election chances hits home because so many individuals now know the pain and agony of watching someone die with this illness.

This thing will kill an untold number of Americans because of Republican incompetence. You can't find any other way to argue otherwise. And yet, here we are, in the face of adversity and a handful of Americans can't seem to get it. This is a terrible time to be alive. The damage that has been done is staggering. And yet, we have to do everything we can to save as many people as possible, even those trying to get themselves sick and even those too fucking stupid to understand that what they're doing is insane.
on April 18, 2020