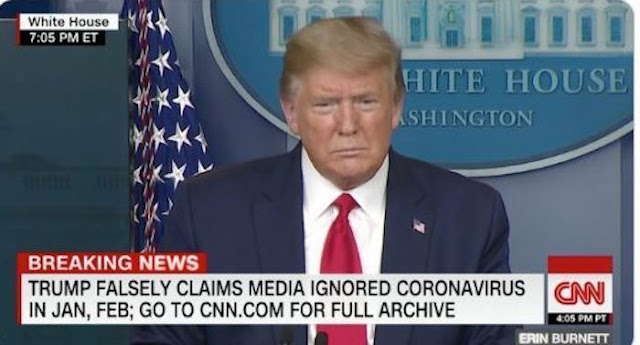 I still don't get why media companies think Trump and his White House are providing them "access" and that, if they anger him, they'll lose it.

There is no "White House" in the sense that Obama and Bush had administrations. This is a regime and nothing more. It's symbolized by how badly Trump wants to ruin things. There's a burning dumpster, it's filled with old tires, and nobody wants to point out that this is how we've been living for years.

When you see people trying to advise the media how to deal with this, all you can do is laugh at how naive it all sounds:


Fifth, don't let the president interrupt your question. Trump often knows where a question is going and barges in before you get to the hard part. Be ready to politely say, "Mr. President, I'd appreciate it if you would let me finish my question before you begin your answer." If he continues to ignore your polite request, he looks like the rude bully he can be. I don't need a poll to tell me that's not a good look. Common sense and a general shared view of manners makes this damaging for the president.

Another strategy is to politely hold the floor and tell the president the answer did not address the question, and say, "I'd like to ask it again." Here's where teamwork really gets involved. Whoever gets called on next should follow up and repeat the question. In most situations, reporters are afraid they'll never get the chance to ask a second question, so they move on instead of working with the previous reporter to pin the President down. But there are now a limited number of reporters and the president often wants to stay out there for hours, so you will most likely get another chance at asking a different question. Work together.

If there's one guy who is not going to be shamed by his behavior, it's Trump. If there's a president who doesn't give a shit about whether he's polite, it's definitely Trump. And the very idea that he won't just walk out of the room because he is accountable to the American people demonstrates just how delusional Joe Lockhart really is.

Has Trump ever improved on the job? Has he learned anything? Has he deviated from his playbook at all? No. And yet, here you have Jake Tapper taking a crap all over himself because Trump acted out in public and did what he would have done a year ago, two years ago, and so on and so forth. Come on, man. There is no learning curve here.

Why are people still acting like this can be turned around? Americans are dropping dead in terrible numbers and the story fluctuates between Trump is trying to come up with a solution and Trump is hollering at the media and nobody has a fucking clue.

Stop carrying the briefings. Cut off the supply of oxygen to this dumpster fire.
on April 28, 2020