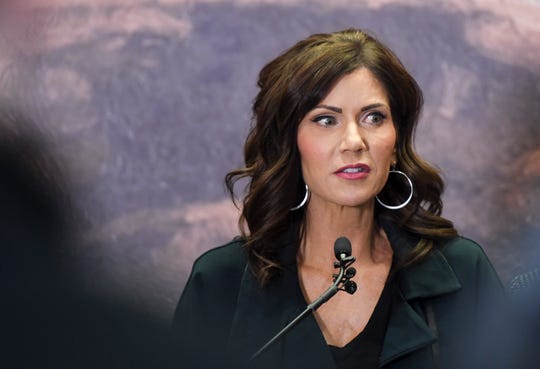 If you live in South Dakota, Governor Kristi Noem has made it her life's ambition to be as much of a threat to public safety as possible. Noem was elected to higher office with at least 27 different citations as a ridiculously bad driver, and has long celebrated the fact that she's just another Republican who doesn't believe in science. Her reckless incompetence is going to reverberate throughout the country.

Well, get ready to go without bacon, proud GOP voters:


One of the country's largest pork-producing plants closed indefinitely after nearly 300 of its employees tested positive for COVID-19. And the company's CEO warned that the coronavirus pandemic is pushing the nation's meat supply "perilously close" to the edge.

"It is impossible to keep our grocery stores stocked if our plants are not running," Smithfield Foods CEO Kenneth Sullivan said in a statement.

Smithfield decided to close its plant in Sioux Falls, S.D., which provides 4% to 5% of the pork produced in the United States. The move came after South Dakota Gov. Kristi Noem urged the company to "do more" to address the pandemic.

"The closure of this facility, combined with a growing list of other protein plants that have shuttered across our industry, is pushing our country perilously close to the edge in terms of our meat supply," Sullivan said.

Republican governance is killing American citizens, wrecking the economy, weakening us in front of our enemies, and destroying the environment. We're not even in the argument phase for those outcomes anymore. You can add the destruction of American food processing to the pile of things that are being trashed, and a rising star in the GOP is now directly responsbile for denying you access to bacon.

Whenever things like this are announced, they create runs on products that end up creating artificial shortages. You'd think it would be important to have officials in place who could use common sense and stop these things from happening. If you live in a red state, I hope your governor isn't as bad as Noem.

The Republican Party can survive a lot of fraud, waste and incompetence. I don't know how it survives ruining America's bacon supply.
on April 14, 2020