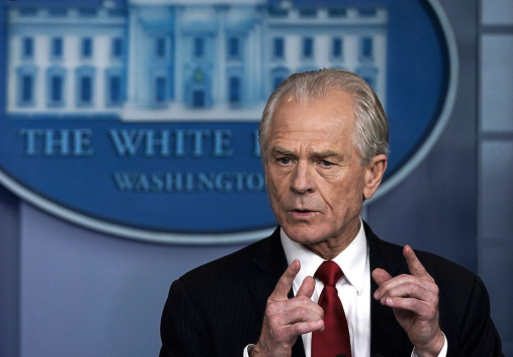 At some point, we're going to find out that Trump's buddy Peter Navarro has a stake in a company that could make millions off of this, aren't we?


There was a heated disagreement in the Situation Room this weekend over the efficacy of the anti-malaria drug hydroxychloroquine -- but multiple sources say it was mostly one-sided, as President Donald Trump's top trade adviser Peter Navarro feuded with other officials over thedrug's unproven effectiveness to treat coronavirus.

The debate is not a new one inside the coronavirus task force -- and medical experts have repeatedly explained to the President that there is a risk in enthusiastically touting hydroxychloroquine in case the drug doesn't ultimately work to combat the virus. But other aides and outside advisers have sided with Trump, including Navarro, who is still not a formal part of the task force but has wedged himself into the meetings.

Axios first reported on the disagreement inside the White House about the drug.
While discussing the latest on hydroxychloroquine this weekend, an exasperated Navarro lashed out at Dr. Anthony Fauci, one of the advisers who has urged caution about the drug, a person familiar with the meeting told CNN.

Navarro had brought a stack of paperwork with him into the Situation Room on the drug, arguing it was proof that it could work to treat coronavirus, which Fauci, the nation's top infectious disease expert, disagreed with because it was not data.

"What are you talking about?" Fauci asked -- a question that set Navarro off. He became indignant, and at one point, accused Fauci of opposing Trump's travel restrictions on China, which confused many in the room, given Fauci was one of the initial few to agree with Trump on the move, the source said.

Here you have Navarro--a fringe thinker who is convinced China is going to sneak into our bedrooms at night and steal our blankets--and Fauci, a man who has been fighting epidemics and pandemics for his entire career. You couldn't come up with a bigger mismatch over scientific and academic achievement if you tried.

Trump has hired so many kooks and grifters that it's a wonder they don't just jail them when they show up for work on their first day. And we're not even into the phase where we'll be in ten years, which will be one of amazement at the fact that any of us are still alive after this era comes to a crashing halt. They're all crazy, incompetent fools and they're getting people killed every single day.

What are we going to do with these idiots? How do we survive the idea that an academic hack and a pretend economist can wave around news clippings and tell the government's top immunologist that we need to put all of our faith in some drug that has never been clinically tested as a coronavirus treatment?

UPDATE: This screenplay is too implausible to produce. Rewrites are a must:

Wow. NYT reports Trump himself has a financial stake in the French company that makes the brand-name version of hydroxychloroquine.https://t.co/FM1t2WadgN