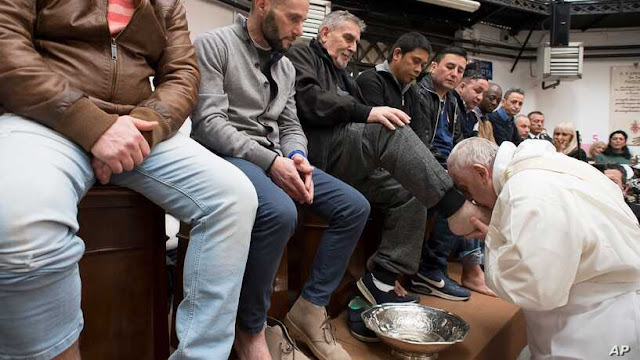 Mrs. Lion and I watched a PBS program on the Vatican, and we saw this scene from the program. Pope Francis washes the feet of prisoners as an act of grace and humility, and this explains the ritual better than I could:


Pope Francis told inmates of a central Rome prison Thursday that a leader must know how to serve.

Just before washing their feet on Holy Thursday at Regina Coeli, just a stone's throw away from the Vatican, the pope also told the inmates that he was a sinner, just as they were, but he represented Jesus.

Francis washed the feet of 12 inmates in the same way that Jesus washed the feet of his 12 disciples before sharing the Last Supper with them. The men, selected by prison authorities, were from Italy, the Philippines, Morocco, the Moldavia region, Colombia, Nigeria and Sierra Leone. Eight of them were Catholics, two Muslims, one Buddhist and one Orthodox Christian.

The visit by Francis to the city's oldest and best-known prison evoked memories of December 26, 1958, when Pope John XXIII became the first pontiff to call on Regina Coeli.

Since the start of his pontificate five years ago, Francis has celebrated the Mass of Our Lord's Supper on Holy Thursday outside the Vatican. In the past, he has gone to detention centers and a home for the disabled to wash the feet of prisoners, refugees and other marginalized people.

We were both very moved by this, and it was entirely an unexpected thing for two Lutherans to be amazed by a Catholic ritual that seems to be practiced by this Pope out of a need to show the world what someone who is actually humble looks like. Mrs. Lion was moved to tears, and I suspect it was because of the shock of seeing this practice in a time like this. There are few, if any, world leaders who could match the piety of Pope Francis right now. Our own president is a simpering jackass in comparison and can't keep the American people safe.

Anyway, I know that this is a thing Pope Francis has done for years, but to see it and to see him kissing the feet of the prisoners is an amazing thing.
on April 28, 2020