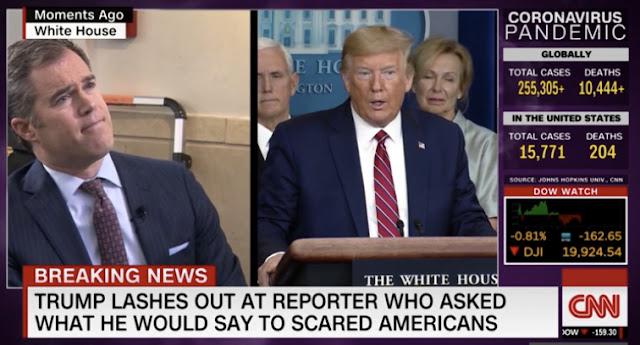 I think it is more than clear that Trump is so unfit to be president right now that there should be serious conversations about what should be done to bypass presidential authority and save American lives.


In an extraordinary exchange on Friday, President Donald Trump viciously attacked an NBC News reporter who asked what his message would be to Americans who are frightened by the coronavirus pandemic that is spreading across the country.

Toward the end of the exchange, Alexander cited the latest pandemic statistics showing thousands of Americans are now infected and millions are scared.

Alexander asked, "What do you say to Americans who are scared?"

From there, Trump went on an unhinged rant. His attacks on the media are shameless. His anger control issues are there for all to see.

The fact that he is failing is self-evident. He knows he and his flailing regime are responsible for widespread misery and the collapse of our economy. He has no plan, no answer, and no one within earshot with the courage to tell him the truth. We have to turn to others for direction and guidance. Fortunately, there are a number of competent governors in the United States who are working overtime right now.

New York Governor Andrew Cuomo is the antidote to all of this. His briefings are organized, factual, and brutally honest. Cuomo is giving her personalized and informed guidance to millions, and it could end up saving an untold number of lives. Contrast that with the raging, pitiful performance Trump is giving because he wants to be known as a "wartime president." He is anything but that.

This was evident the week Trump was inaugurated. We've been through numerous scandals - a full blown impeachment trial, Charlottesville, Helsinki, the firing of James Comey, every G7 summit, and practically all of 2019. Today was all of that, ramped up to a full-blown crisis entirely of the GOP's making. The fact that they protected Trump and kept him in power when they knew that they should have removed him from office is something entirely new to our present politics.

We're in broken record territory once again. I could have written this three years ago, easily. As Americans wake up to a new reality--an entirely changed existence--it's important to realize that all of this could have been prevented. None of what's happened was inevitable. The United States Senate could very easily have ended our long national nightmare and they chose to stick with Trump.

I am not pretending everything would be just fine under Mike Pence. If anything, Pence is just as compromised, more than completely out of his element, and paralyzed by his quaint religiosity and his belief that God has put him where he is. No, God didn't put him there. Trump put him there to convince people that he was going to be a normal president.

That has not been the case, ever.
on March 20, 2020
Email ThisBlogThis!Share to TwitterShare to FacebookShare to Pinterest
Labels: Credibility, Disaster, Discourse, Editorial, Fiasco, Health, Incompetence, Media, News, Opinion