Trump Does Not Possess Humility or Humanity 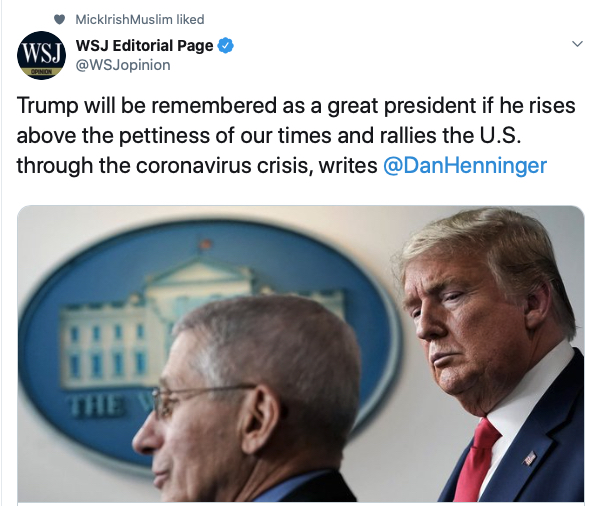 Trump will be remembered as a president who lacked the humility to do the right thing and the humanity to understand the suffering of the American people.

I'm not even going to link to this wretched article. It is behind the Wall Street Journal's paywall, and it is entirely a political screed unworthy of being answered in detail. It's the sort of fluff piece someone cranks out when they are suffering from withdrawal.

Trump is definitely suffering from not being in front of adoring crowds and supplicants in one of his vermin-riddled resort hotels. He is an attention junkie and all he sees now are the hangdog faces of the sons of bitches who can't do anything to fix the crisis in which we find ourselves.

When you're incompetent, you can't even see the path to redemption. The only path forward is to be fired from your position so that someone better can step in and fix the problems you couldn't solve. If Trump wasn't president, and if he was simply running his own company, he would have to go back to Deutsche Bank for more cash to stay afloat. You can't do that when you're in charge of the world's most important enterprise.

Trump has expressed no sympathy for the suffering of those infected with COVID-19. He had to be talked into the idea that he had to abandon trying to link it to the Chinese. He had to be convinced that it wasn't working to refer to this as many other racists do, "the Chinese virus." In this, he fails the most basic test of decency.

He doesn't have a shred of humility either. He takes no responsibility for what he has failed to do. Anyone who suggests that Trump is suddenly going to begin acting presidential has been in a self-induced coma for the last five years. He is human scum and he is the last person on Earth who should be running things.
on March 26, 2020