The Media is Failing America 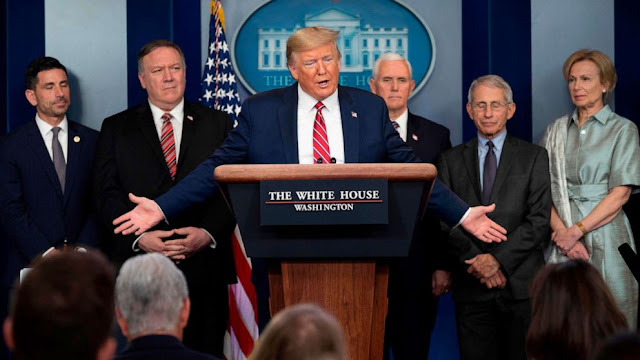 
t’s time for journalists to stop expressing shock regarding his erratic and heartless behavior, because that unwarranted shock just helps normalize Trump's dangerous behavior. It plays into the idea that Trump at times behaves rationally, and picks and chooses when he should act like a leader, and when he does not need to — that Trump can mimic the actions of a sane person when the situation calls for it.

If we take a step back, the scale of government’s failure is so complete and so sweeping it borders on the incomprehensible. After a while, explaining this away as Trump being unfocused, or not having a plan, or being shortsighted just doesn't add up. The failure to protect has been so thorough, it's difficult to suggest it’s happened coincidentally.

Why is it taboo? The possible answers are too disturbing for the press to ponder, therefore they're deemed off-limits. Instead of addressing the reality, the press prefers to stick with the safe narrative that the White House is muddled and disorganized. To address the other possibilities would raise stunning questions about the President of the United States —the types of questions that have never been asked about any president in this nation's history.

I would agree that there is very little evidence that Trump's White House is "muddled and disorganized." I think the opposite is true. It is geared specifically for maximizing profit and advantage for Trump's business interests and it is organized to inflict maximum damage on the Americans who have expressed opposition for Trump's personal agenda. It's time to stop thinking of Trump's White House team as a bunch of stumblebums and recognize them for what they are--an anti-American hit squad that looks for any opening in which to shove a knife.

Yes, they are incompetent. But that's almost on purpose. If you want things to run smoothly, you hire qualified people who have experience. In Trump world, the only people considered for positions of responsibility are those who have been deemed sufficiently loyal to Trump. That usually means that they are hiring people who would never be considered for gainful employment anywhere else. They're putting the dregs into positions of responsibility. At this stage, Trump's regime has three college kids in positions that would normally go to people with at least ten years of government service. And we all know what a debacle it has been just trying to find appointees.

There can be no question that Trump's personal agenda is funneling government money into his businesses and hiding this from the American people.  Not only is the media failing to properly assess how they are handling COVID-19 but they haven't even begun to wake up to the fact that Trump is dealing out insider information to business allies.

Don't fall for the idea that William Barr's Justice Department is actually investigating Republicans in Congress who have been involved in overt insider trading. They are going to carry out a sham investigation and purposefully foul the evidence against them so that the next Democratically-controlled Justice Department can't actually take three or four Republican Senators to the woodshed. The media used to be able to ferret out all kinds of criminal activities. They sometimes find an acorn in the mud, but a blind pig would still be able to do a better job.

If you begin to evaluate every facet of Trump's organization as a criminal conspiracy to defraud the government, it all makes sense. Trump has ties to people who are going to make millions in profits from COVID-19. They're appearing before the press every time he gives a briefing and lets them make self-serving speeches that are barely disguised as feel-good ads. The conspiracy is right out in the open. The crimes are happening as we speak. But a heavily-compromised media is still beholden to the idea that Trump is what drives their profits. They pretend to present information designed to outrage people but they never follow through on what is obvious. To do so would kill their ratings and frighten away advertisers who are able to handle a little truth telling but not nearly enough.
on March 30, 2020