King Trump Has No Time For the Peasants 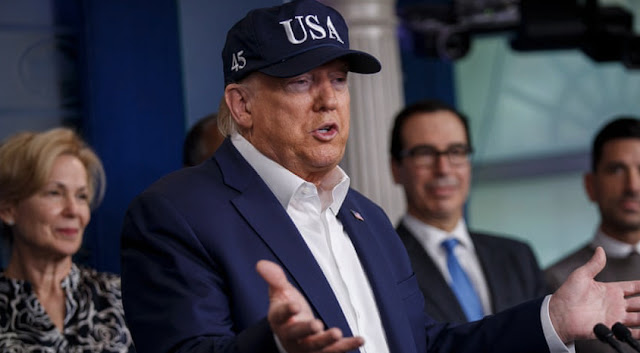 Who in their right mind would appear in a blue hat, dress shirt, no tie, and a cheap suit coat designed to make a fat boy look reasonable?

The ongoing farce that is our life right now is punctuated by Trump's inability to act or function like a normal president. He has to make every briefing, every appearance about himself. He is surrounded by people who would never be allowed to work in any other Republican administration. He acts like the head of a fading junta, one that just had all of the generals shot for insufficient toadying. And the toadies that are left fawn all over Trump as if he just got done screaming at them because they weren't praising him enough.

Normalcy. A return to things that seem normal. A normal life, a normal president, a week or two that could sail by without having to think about who's running the goddamned country. This is all we want.


The Washington Post has reported that a second person who visited President Trump’s private Mar-a-Lago estate last weekend has tested positive for coronavirus. It’s the second person in as many days who’s had coronavirus and been near the president, a widely reported germaphobe.

International passengers are still stuck on the Grand Princess, the stricken cruise ship that docked in Oakland early this week. Fourteen passengers will likely remain there for the weekend. Officials initially said it would take three days to clear all passengers from the boat. It’s now day 5.

Trump blasted PBS reporter Yamiche Alcindor for pressing him on whether he takes responsibility for axing the Global Health Security team in the National Security Council, which was set up in the wake of the Ebola outbreak to make sure that the government response to a pandemic would be coordinated. Former officials describe it as the lynchpin of the response mechanism. Trump called the question “nasty.”

Yamiche Alcindor is a great journalist. There was no justification for this. The entire press corps should have stood up and walked out when Trump did that. But no, they are cowards and they stayed, hoping for more access and for a moment of normalcy that will never come.

Do you want to know who you should turn to for information? Not Trump. Not the CDC or the various Federal agencies that are supposed to protect Americans and their health. Look to your state governments or whoever runs your city. If they happen to be a bunch of goddamned wingnuts, vote them out as soon as possible.

Americans are suffering and dying because Trump is incompetent. He is surrounded by incompetent assholes. Never forget that this is why you have to register and vote them out and keep them from ever getting into a position of power again.
on March 14, 2020