Joe Biden Is Ready to Fight 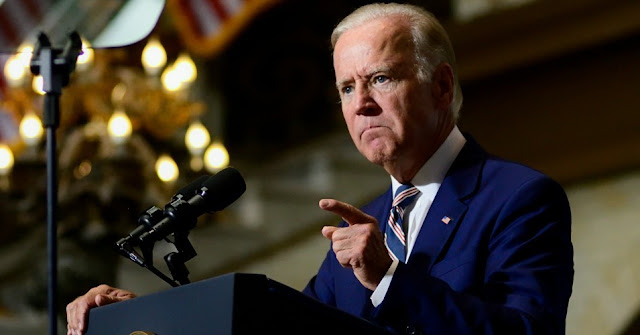 Joe Biden will not put up with your bullshit:


President Donald Trump turned insulting big-name rivals and celebrities into a form of modern political art. His top Democratic challenger, Joe Biden, has refined it into a post-modern name-calling style exhibited in limited fashion to voters who confront him with cheap shots.

"Don't be such a horse's ass," Biden scolded a worker at an auto plant in Detroit on Tuesday as Michigan voters went to the polls.

The worker had falsely asserted that Biden wants to "end our Second Amendment right" to own guns. Biden, the author of a decadelong 1994 ban on certain semi-automatic weapons, has proposed new gun control measures but not a repeal of the Second Amendment — which as president he would have no formal role in adopting.

But the heated exchange, in which Biden threatened to slap the man and said he was "full of s---," was just the latest example of a tough-talk tactic the former vice president has deployed repeatedly to push back on critics on the campaign trail. While allies of Trump and Sen. Bernie Sanders say the aggressive approach will backfire politically, many Democrats and some anti-Trump Republicans like the unusually muscular response.

They see a candidate who has risen in the polls and in early state primaries by demonstrating his resilience to Democratic voters and one who is telegraphing to the broader electorate that he's ready to go toe-to-toe with the bombastic Trump if he wins his party's nomination.

"Kind of amazing that anybody thinks this video makes Biden look anything other than terrific," David Frum, a former speechwriter for President George W. Bush who supports Biden, wrote on Twitter. "He shushes the aide who wants to lead him away — and then engages a hostile critic face to face, fact to fact. Impressive."

Of course, there will be a media backlash centered around the fact that this is a Democrat who is acting like "daddy." The media hates it when Democratic politicians upend their belief structure and present a public image that goes contrary to their preferred way of seeing the world. There is the storied example of John McCain and his Straight Talk Express. Really, that was just granted executive club access to a handful of political journalists and serving them some juicy quotes and barbecue.

I don't expect Biden to karate chop anyone. I do expect that he will add some savvy people to his team that will help him ferret out the attempts by the alt-right (which still exists) to trip him up in public events and use videos of Biden stumbling to paint him as infirm and weak. The opposite appears to be true. Biden is the strongest of all the candidates running in terms of being able to connect with voters and speak to their experiences.

In other words, I hope to hell we are not going to see John Kerry's goddamned wind surfing or trips to the Hamptons. I want to see Biden running around all summer with his sleeves rolled up, throwing trolls into the fire.
on March 11, 2020