Here's a Free Tip For the Media 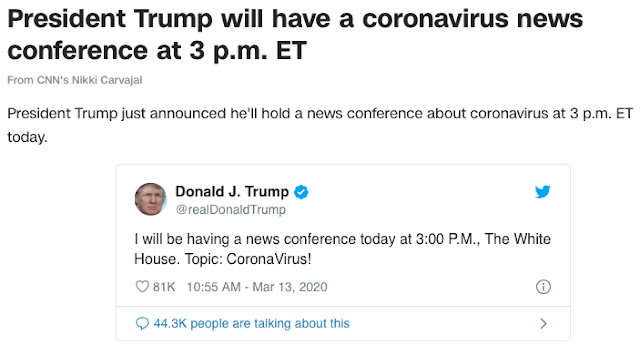 Stop allowing Trump to mislead, misdirect and outright lie to the American people about what is being done and who is responsible.

Stop the Trump Regime's efforts to offload blame and divide the American people with hatred and xenophobia.

Just stop running his remarks live. Cut off the flow of information from Trump to the American people, who are being manipulated and terrified and panicked on purpose in order to ensure that there is no accountability for incompetence and greed.

Republican ideology brought us to this moment. An emphasis on privatizing and profiting from coronavirus testing resulted in no tests being available. The virus itself is seeded deep into the American population, and has been for weeks, because of an inability to properly plan for and react to this crisis. Trump fired the people who would manage and mitigate a pandemic. Trump cut funding for the social safety net.

The Republicans did this to the American people. Pretending that Trump is a normal president who should be allowed to speak to the population unfiltered is journalistic malpractice.

Instead, present facts and guidance as to what should be done and how people can protect themselves. Allow this information to proceed without comment from any Republican who rejects science and information.

We are on the cusp of mass panic. The lies have to stop. This is what I'm talking about: 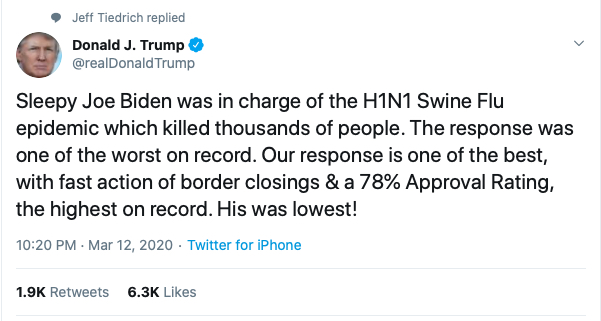 Nothing in that Tweet is decent or helpful. It is a profane, screeching rant from someone who doesn't care about your family or anyone else on this Earth. It is well past the time when we should look to this man for anything other than a self-serving howl of pitiful bullshit.
on March 13, 2020
Email ThisBlogThis!Share to TwitterShare to FacebookShare to Pinterest
Labels: Blame Game, Credibility, Crooked, Editorial, Ethics, Fiasco, Media, News