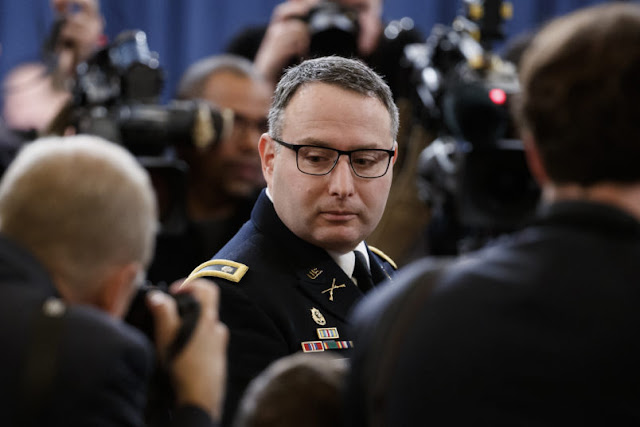 When you fail to show obedience to the dictator, expect to be purged:


Lt. Col. Alexander Vindman, a key witness in President Donald Trump's impeachment inquiry, has told colleagues he expects to leave the White House's National Security Council in the coming weeks to return to the Defense Department, a source tells CNN.

Vindman said his departure from the council could come as soon as this month, the source said. That would be well ahead of the scheduled end of his time at the White House, which was originally slated to last until July. Vindman was appointed to his post in July 2018 and was asked to stay for two years.

The source did not say whether Vindman's departure was voluntary or at the behest of the White House, though aides inside the West Wing had speculated it could come soon as the impeachment trial was over.

Democratic presidents have had to contend with openly hostile members of the military and disloyal high-ranking bureaucrats for decades. They relentlessly leaked damaging information about Obama and Clinton, and they were covered by Republicans in Congress who actively used them to advance their own agendas. This was particularly true during the Obama years when Benghazi was all the rage.

Expect a large number of diplomats and members of the military to be purged from the ranks. It's been happening right under our noses, and it will accelerate now because Trump has been given a free hand to remake as much of the government as he wants in his own crooked, stumblebum image. The experts are going to be gotten rid of. You'll probably see someone's idiot kid in Vindman's job because that's how we do national security these days.

Vindman never showed an ounce of disloyalty to the American people. He raised legitimate concerns about an unlawful act by the president in his area of expertise. And now he's going to be hung out to dry for it. His career is, essentially, over if Trump is re-elected and probably even if he goes down in defeat because of the vast number of officers above him who will maintain their fealty to the GOP.  And it's a shame because the man did nothing wrong.

Never forget that the Republican Party is now a cult, and you ain't in it.

UPDATE: Vindman and his brother have been frog marched out of the White House, and Gordon Sondland knows what it is like to give Trump a million dollars and end up being fired. Here's hoping that Sondland's hotels never see another paying guest ever again.