Put an Asterisk Next to His Name From Now On 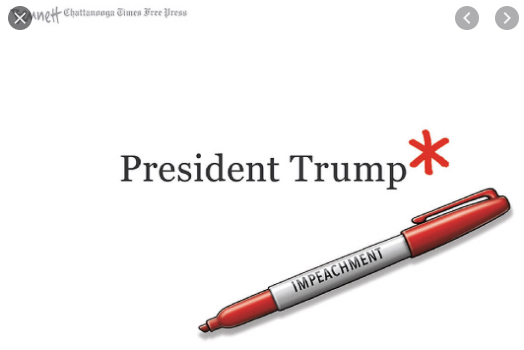 I'm starting to think Trump really does have some untoward associations with those damned Russians:

Last week's briefing, led by election security official Shelby Pierson and first reported by The New York Times, addressed the overall picture of Russia's efforts, including hacking, weaponizing social media and attacks on election infrastructure, one of the sources said.

The briefers said Russia does favor Trump, but that helping Trump wasn't the only thing they were trying to do as it was also designed to raise questions about the integrity of the elections process, the source added.

Trump became irate in a meeting with outgoing acting Director of National Intelligence Joseph Maguire last week for allowing the information about Russia's meddling efforts to be included in the briefing, a White House official said.

Russia's interference in the 2016 election -- which the US intelligence community believes was aimed at boosting Trump's candidacy and hurting his opponent, Hillary Clinton -- led to special counsel Robert Mueller's investigation. The prospect of interference in 2020 will further test US defenses against foreign meddling, which Trump has repeatedly downplayed as he has dismissed any suggestion that Kremlin influence played a role in his election.

Trump is surrounded by what's left of the incompetent sliver of the GOP that was willing to work for him. It was made up of an assortment of toadies, crazies and pig fuckers who caught on after the inauguration because standards got in the way of finding warm bodies to fill jobs that were left empty. The Republicans who originally filled them left within the first year. The best way to imagine how it is in the White House right now is to picture a conference room table covered with broken glass, tears and human teeth and not much else.

This is the fiasco government you get when everyone sleepwalks through the gradual dumbing down of the culture. Idiocracy is here, and it's a 300 pound jackass who heaves himself around in a blue suit, rage tweeting at everyone and everything because a handful of Republicans in the Senate are incapable of understanding how to do their job.

Are we ever really going to know what happened in 2016 and what's happening right now? I really do believe he's going to crash and burn before the debates in the fall. I doubt very much that he can get re-elected. He has never been popular, he is universally hated by every decent American who values the rule of law, but the Democratic Party is trying like hell to turn a sure-thing into an oh-my-God-we're-going-to-blow-it kind of moment.

It could very well be the case that the next president, whoever she is, will have to decide whether or not the real information about Trump and Russia can be released to the general public. I believe that there is so much that has been suppressed, shredded, or altered that we'll never get the whole story. Perhaps learning that the president actively collaborated with Russia and accepted hundreds of millions of dollars in loan from Russia's oligarchs will blow everyone's minds to a degree that makes telling the truth more dangerous than continuing to live a convenient lie.

To me, it doesn't matter. Trump is the worst human being imaginable. You couldn't make him in a lab. He is a black hole of nothingness, a blasted out shell of a person who has no belief structure beyond self-aggrandizement. He is the antithesis of an American and has never contributed anything to our society that could be considered selfless or valuable. He worships cheap crap made to look expensive, whether it's an apartment, a toilet, a lobby or a wife. He has churned out shitty ideas, shitty buildings, and even shittier businesses for his entire adult life. You'll never meet a bigger jackass as long as you live and you know it.

Of course he's working with the Russians. This is a man who hates America.
on February 20, 2020