Mike Pence is Out of His Depth 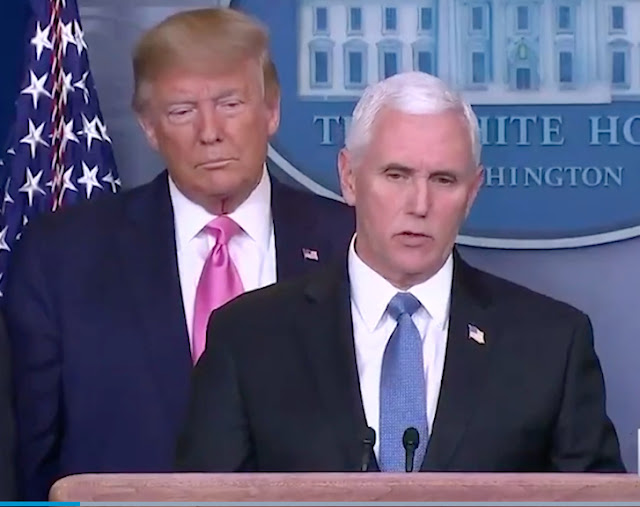 I love how Trump is setting Pence up to take the fall:


Vice President Mike Pence said Saturday that while most Americans face a low risk from coronavirus, more US deaths could be imminent following the nation's first confirmed fatality.

"We know there will be more cases," Pence told CNN's Jake Tapper in a clip released Saturday, echoing President Donald Trump's earlier comments that additional cases in America were "likely." The full interview between Pence and Tapper is airing on Sunday's "State of the Union."

When asked whether more Americans could die from the disease, Pence, who Trump has put in charge of coronavirus response and messaging, replied, "It is possible."

Pence said that the situation explained to him by Dr. Anthony Fauci, the director of the National Institute of Allergy and Infectious Diseases, and others is that "most people that contract the coronavirus, they will recover. They will deal with a respiratory illness, we'll get them treatment."

The vice president cautioned that the US could experience "more sad news."

"But for people that have other conditions that would militate toward a worse outcome that, we could have more. We could have more sad news," Pence said. "But the American people should know the risk for the average American remains low."

A chaotic, disorganized, and incompetent White House is about to run into the reality of a major outbreak of an illness that cannot be managed or controlled because they have spent the last three years destroying the capability to do so. It was deliberate. And, because of all of that, there has to be someone to take the fall for these decisions.

Pence is the guy who is going to have to be sacrificed for what's about to unfold. He is completely and utterly out of his depth and incapable of understanding how science works. He was responsible for a horrific outbreak of AIDS in Scott County, Indiana, and he has no idea what he's doing with regards to coronavirus.