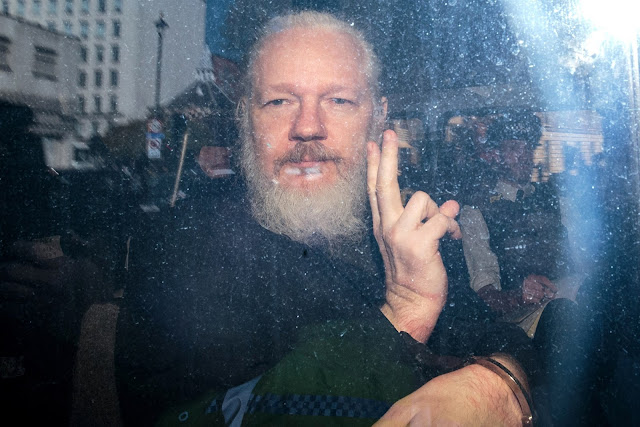 For a low-rent pimp like Trump, it has to hurt to see all of his whores turn on him like this:


WikiLeaks founder Julian Assange plans to claim during an extradition hearing that the Trump administration offered him a pardon if he agreed to say Russia was not involved in leaking Democratic National Committee emails during the 2016 U.S. election campaign, a lawyer for Assange said Wednesday.

Assange is being held at a British prison while fighting extradition to the United States on spying charges. His full court hearing is due to begin next week.

Fitzgerald said a statement from another Assange lawyer, Jennifer Robinson, recounted "Mr. Rohrabacher going to see Mr. Assange and saying, on instructions from the president, he was offering a pardon or some other way out, if Mr. Assange ... said Russia had nothing to do with the DNC leaks.”

Regular followers of the seizure of the American government were alerted to Rohrabacher's efforts around the time they happened. No one got into or out of the Ecuadorian Embassy in London without multiple intelligence agencies knowing about it, and the whole place was bugged. Whatever Rohrabacher said to Assange was probably transcribed in real time and in the hands of fifty different people before he was able to make it back to his hotel room.

I mean, what a bunch of awful people.

Revelations like this move the needle a little, but, really, Trump is pardoning his way out of legal jeopardy. Outrage only goes so far. What I hope for is an eventual day of reckoning where it is possible to reverse Trump's pardons because they are part of a larger effort to obstruct justice. While this is unlikely in a divided Congress, it really should be the focus of a future administration that seeks to restore the rule of law.

What should happen to Assange? Well, he won't find justice in America. He's a problem for numerous governments, and a hero to the dirtbag left while being a cutout for Putin and the like. He has tried to present himself as a pitiable figure, but the bluster of his early efforts to tell the truth on everyone in power is now largely forgotten. I would not want him to be denied due process, but, really. What do you do with someone who decided to advance fascism and nihilism at the same time?
on February 19, 2020
Email ThisBlogThis!Share to TwitterShare to FacebookShare to Pinterest
Labels: Commentary, Crazy, Crime, Editorial, Fiasco, Justice, Law, Opinion