It's the Corruption, Stupid 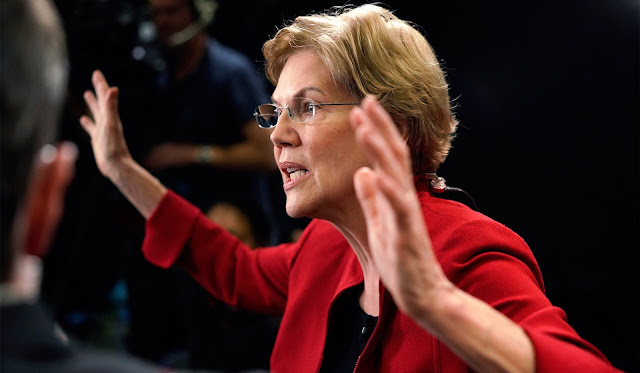 The problem at the root of everything that Trump has done is corruption. It was what allowed him to steal the presidency and rob the country blind. The media has been slow to understand the impact of the corruption. They dutifully reported the comings and goings of dozens of government officials. What they failed to do in early 2017 is properly link Trump to the corruption that has been allowed to poison our politics.

Elizabeth Warren is my choice for president. She's going to deal with this problem, head on:


Warren had too many stops to make over the last three days of the Iowa caucus campaign to hang around for her trademark selfie line afterwards. However, Bailey the dog was available to step in and was certainly popular, especially with the service dogs in attendance, who looked on Bailey curiously, like basketball players when Michael Jordan stepped in for a pickup game. Warren—and Bernie Sanders and Amy Klobuchar—are all burning up the highways and byways here this weekend because, as senators, they were obligated to spend two weeks in Washington listening to the grinding of Pat Cipollone’s interests as they conflicted with each other, grinding up the canons of legal ethics along the way. So if the homestretch here is more frantic than usual, blame the effort it takes on the part of this White House to turn the constitutional processes of government into a burlesque.
If nothing else, this obviously should be a good moment for Warren, whose campaign is based on her conviction that our government and our politics are so corrupt that Big Structural Change is needed to clean out the Augean Stables in the District of Columbia. On Saturday, she deftly connected decades of increasing corruption with the undeniable end product, which is this administration* and this president*.
“The good news is that I have the biggest anti-corruption plan since Watergate,” she said. “The bad news is that we need the biggest anti-corruption plan since Watergate. These problems, this corruption, started long before Donald Trump became president.
If I'm being honest, I would love to see Kamala Harris run alongside Warren. That would be a ticket designed to heal the country and bring women to the polls in a way that would put them over the top. But that may not be the most complete ticket possible, and it might now hew to the center the way it would need to for this election. I wouldn't mind a Biden-Harris ticket or a Warren ticket with Stacey Abrams. I'm fine with any of that. Anything but Bernie Sanders and Tulsi Gabbard.

I do believe the country leans to the left on policies that the Democratic Party brings to the table. I don't think we need a purely centrist ticket. I do think we need a ticket that excites the American people and brings voters to the polls in one massive blue tsunami. An all female ticket might just counteract the poison of Trump and force him to dump Mike Pence out of desperation (which is what I think is going to happen in the next few months).