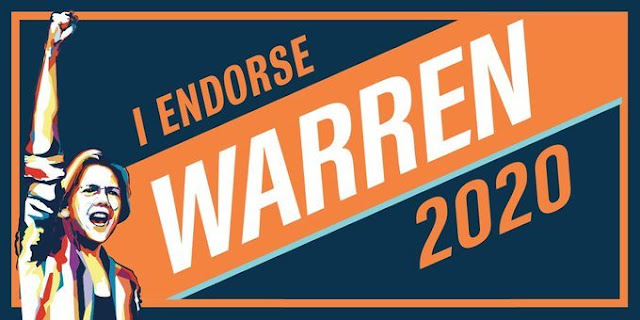 I was really hoping to be able to talk about endorsing Elizabeth Warren for president. Instead, we have the Iowa Debacle and what it means for the primary season.

It's pretty clear to me that letting third-rate people run things is not going to bode well for the Democratic Party. Making the necessary changes in leadership, strategy and organization is something that better happen sooner rather than later. It's not possible to overstate how important this election is in terms of saving American democracy.

Endorsing Warren was a no-brainer. I think she will choose the right running mate and will win the 2020 election. She will bring every one of Hillary's voters to the table and energize the voters who turned out in 2018. She will then roll all of that up a pretty big hill and get some help from everyone who thinks the country needs to move on without Trump.

Everyone else running for the Democrats could do that as well, but I'm going with Warren. No matter who gets the nomination, I'm going to crawl over broken glass to vote Blue.
on February 04, 2020