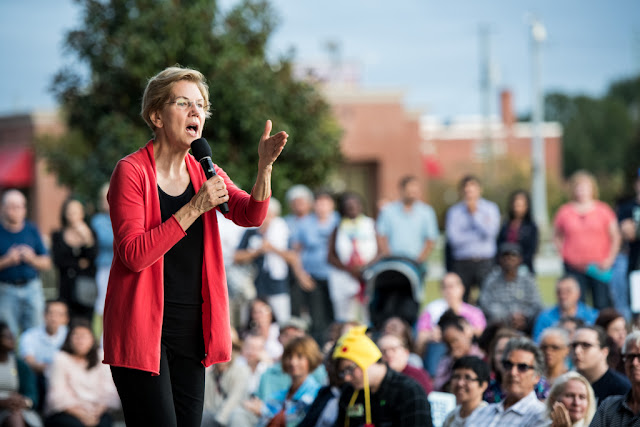 I have to confess that I like darned near all of people running for president, but I'm endorsing Elizabeth Warren because I like her approach to problem solving. I think she has the best chance of explaining what needs to be done, how to get it done, and how it will benefit the country. The next president is going to have to be the explainer in chief and win the arguments that it isn't even possible to have with Trump and his supporters.

Warren has so many plans, no one could adequately blog about all of them. What I like about this plan is that she isn't selling our future short. She's willing to make a huge investment.


Climate change is an existential threat. It’s real, it’s man-made, and we’re running out of time to address it. Our government needs to take bold action and use all the tools available to combat climate change before it’s too late.

That’s why I’m proud to be an original supporter of the Green New Deal. That’s why I’ve proposed a historic $2 trillion investment in researching, developing, and manufacturing clean energy technology here in America so that we can lead the global effort to slash greenhouse gas emissions by 2030 and beyond. That’s why I support returning to the Paris Agreement and restoring Obama-era environmental protections like the Clean Power Plan. And that’s why I’ve proposed a set of executive actions I’ll take on day one of the Warren Administration to stop drilling and promote renewables on public lands.

Today I’m proposing a plan to attack climate change from another angle too — using the power of public markets to accelerate the adoption of clean energy. I’m proud that my plan has the support of former Vice President Al Gore, a long-time leader on combating climate change, and support from many colleagues in Congress, including Senator Ed Markey and Congresswoman Alexandria Ocasio-Cortez — the original authors of the Green New Deal.

Yep, this is what I can get behind. We need to do it and that's why we need to make sure people are ready for the November election.
on February 05, 2020