Elizabeth Warren Will Not Be Erased 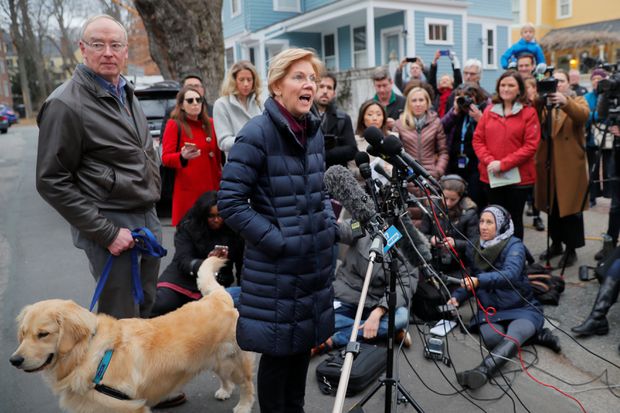 It has been two weeks since this very important piece by Joan Walsh:


“From the beginning, all of the women in the race—Kamala Harris, Kirsten Gillibrand, Klobuchar, Warren—have known they were facing erasure,” says former Iowa Democratic Party chair Sue Dvorsky, who switched her support from Harris to Warren after Harris left the race in December. “Elizabeth has known she has to just stay in there and keep fighting and just not quit.”

But since getting one of the “three tickets out” hasn’t earned her much of a bump, Warren will have a harder road ahead in New Hampshire, Nevada, South Carolina, and the Super Tuesday states.

Finishing a distant fifth, Klobuchar did herself a big favor by jumping out on Monday night and claiming some sort of victory, in a speech networks took live and in full, in an absence of other clear news at that point. Biden, Warren and Sanders got less time; Buttigieg, who appeared last and claimed a victory he hadn’t been granted, actually got more.

“I really wish Elizabeth had gone out there first, like Amy did,” Dvorsky says ruefully.

I'm biased as hell. Elizabeth Warren is my choice.

The media is not ready for a woman president, but they should be. They should be ready for this eventuality because the country is ready for it. The world is ready for the president to be a woman. There is a deplorable minority that can't handle the truth, but who cares about them anyway?

For too long, the media has been an easily worked referee. There is too much focus on maintaining access to the drip-drip of leaks out of Trump's regime. There is an effort underway to deny Warren the nomination and erase her from coverage because she's going to raise taxes on the wealthy. Guess what? No matter who the next president is, they're going to find themselves where George H. W. Bush found himself after the Reagan years--in a position where we will have to tax the rich because they've been given too large of a tax cut.

America's future should not be in the hands of people who can't get past their bigotry and sexism. They are costing this country a king's ransom. Think of the solutions we can't get to, the problems we're not dealing with, and the trouble we're going to have putting the country back together. We need someone to deal with all of that and come up with solutions, and I've felt that Warren was the best candidate for the job. Kamala Harris would make an incredible partner and be a fantastic Vice President or Attorney General in the next administration.

How great would it be to replace Trump and Pence with Warren and Harris? And they have Klobuchar as our next Attorney General?

Yes, vote blue no matter who. But, damned if it isn't an act of treachery to continue erasing Elizabeth Warren.
on February 17, 2020
Email ThisBlogThis!Share to TwitterShare to FacebookShare to Pinterest
Labels: 2020, Commentary, Editorial, Leadership, Opinion, Taxes