A Budget That is Dead on Arrival 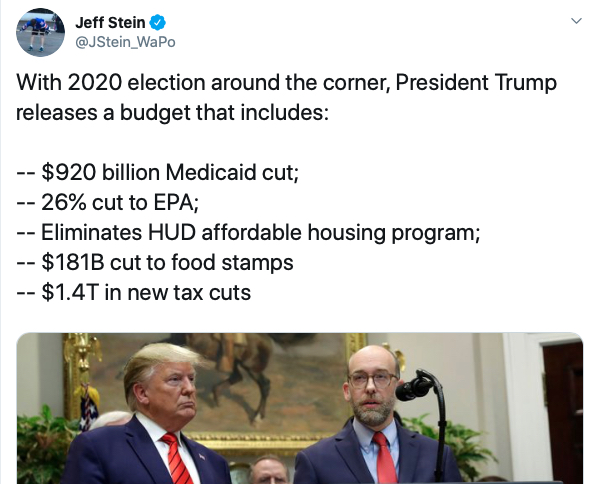 The budget that Trump submitted for consideration would normally end his re-election hopes outright and leave the entire Congress scratching their heads. This isn't a proposal. It's the very manifestation of someone's anti-government, anti-common sense ideas, written out in crayon and flung through the window tied to a brick. If you live in a red state, your "president" just took a giant crap on your head. Knowing Trump supporters like we all do, they'll probably dance and clap and ask for more of the same.

You want to enter the 2020 election cycle with a budge that slashes Medicaid? I can't wait for the AARP to react to this. Cutting $181 billion in SNAP benefits is your garden variety heartless GOP move, something they normally hide in an off year budget proposal.

This is pure evil. It's not a budget, it's a massive poison pill.

I guess nobody in the Republican Party wants to be re-elected ever again. Hell, this is the epitome of the idea that Trump is popular because he hurts the right people the right way. I mean, these are career-ending votes if this goes anywhere. Trump is clearly betting that this doesn't get out of the House, and I guess he wants to be sitting here with a government in shut down mode.

I guess we should just count on unvarnished horrors from here on into the fall election. Get ready for legislation to ban Christmas.