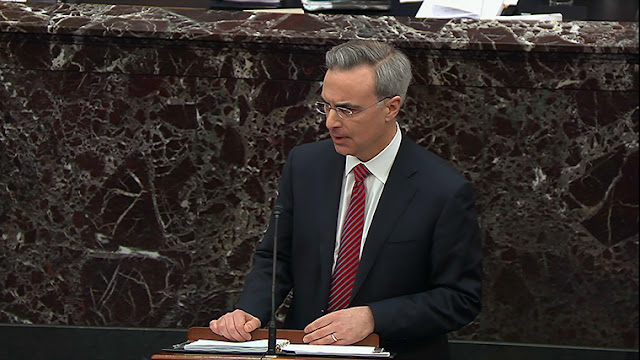 Jay Sekulow and Pat Cipollone are a pair of nincompoops:


After remarks from Adam Schiff and Jay Sekulow, White House counsel Pat Cipollone again spoke on the Senate floor, where he railed against Schiff and the House impeachment proceedings and argued against witnesses in a Senate trial.

An impassioned Cipollone lamented that President Donald Trump was given a “minimum of due process” during House impeachment proceedings.

House Democrats, he said, held the articles of impeachment for 33 days, arguing that their case is not prepared if they need to hear from additional witnesses in the Senate.
“We hear all this talk about an overwhelming case. They’re not even prepared,” he said of Democrats.

House Democrats, he said, “concocted a process” that locked the President out, calling out Schiff, who has not provided documents regarding his staff’s work with the whistleblower.

Cipollone went on to call the idea that Democrats want to call witnesses in the Senate trial “ridiculous.”

Representative Adam Schiff has wiped the floor with these assholes. The other house managers all look like thoroughly prepared counselors. There is a lopsided reality at work here. Sekulow and Cipollone are going to win based on the fact that the Republican Party is sucking the teat of corruption bone dry. They're not going to win based on the truth, the Constitution, the law or a damned thing. They're going to walk out of the Senate chamber having won the case but the mockery of American history. They're going to go down as two lucky sons of bitches who woke up on third base thinking they'd hit triples.

I never thought I'd see two less distinguished men represent the President of the United States in a legal proceeding. This is the brain trust? The best and the brightest? The whiz kids of the president's legal defense team? The cream of the crop? Jesus Christ, they're the biggest idiots that ever tricked the bar into letting them practice law. These guys couldn't get a cop out of a speeding ticket.
on January 21, 2020