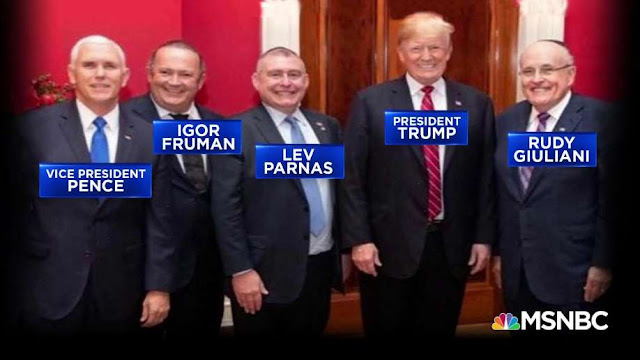 Trump and his band of lackeys are so hopelessly compromised and susceptible to blackmail that it isn't even funny:


President Donald Trump was captured on tape at a 2018 dinner with Lev Parnas and Igor Fruman demanding the firing of Marie Yovanovitch, who was then the US ambassador to Ukraine, according to an attorney for Parnas.

"Get rid of her!" a voice appearing to belong to Trump says on the recording, according to ABC News, which on Friday first reported its existence.

CNN has not reviewed the tape.

According to Parnas' attorney, Joseph Bondy, the recording was made by Fruman and shared with Parnas "shortly after it was recorded." An attorney for Fruman declined to comment.

Bondy told CNN on Friday evening, hours after the tape's existence was initially reported, that he had turned over the audio to the House Intelligence Committee. He said he had Parnas go back through his "cloud" and Parnas found the audio.

The recording appears to substantiate accounts of the dinner Parnas has provided in interviews, at a time when he has emerged as one of the central figures of the impeachment proceedings against the President.


This is absolutely sickening. The President has been tape recorded by a man linked to an oligarch linked to Putin. And now that tape is in the public domain, destroying any possibility that Trump and the people around him have been guarding America's secrets. You should now assume that the president is so hopelessly compromised that we are probably wasting our time impeaching him.

Yes, the Ukraine thing is a crime and he should be removed from office. The bigger picture is that America is entirely exposed and undefended. Intelligence agents overseas, American interests throughout the world, and every single effort underway to protect the U.S. from our enemies are all likely compromised and exposed in some way. If we had a functioning government, there would be an effort underway right now to determine how Parnas and Fruman were able to tape record Trump and whether or not we should be making wholesale changes to Trump's interactions with the public.

That would mean taking away his phone, closing him off from donors and sycophants, and restricting him to facilities that have not been compromised by Russian or Chinese intelligence agents. If there was anything resembling common sense right now guiding the people who are supposed to guard Trump, he would never set foot in a Trump property again.

Unfortunately, none of that is going to happen. Trump has terrified enough weak-minded, spineless people to maintain a hold on power that is going to be impossible to break if we don't have a free and fair election in November.
on January 25, 2020