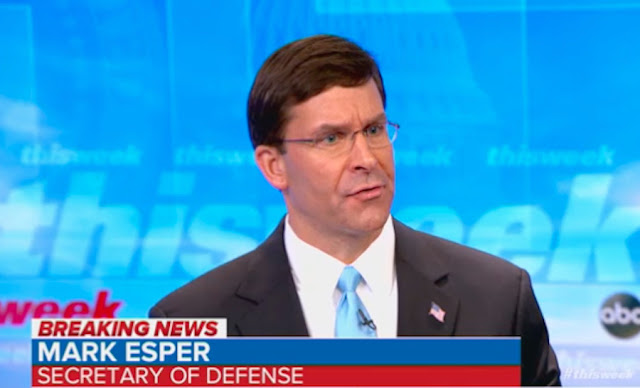 Today was a day where the Secretary of Defense actually contradicted the President of the United States on a matter of national defense and was not summarily fired. That's the sort of thing that gets your attention when there is an avalanche of horrifying developments.

It is difficult to imagine anything like this happening without there being some sort of repercussion, but there wasn't one, at least not right away. Esper is a virtual unknown to the vast majority of Americans and is just trying to keep his boss from being impeached again:


Secretary of Defense Mark Esper on Monday contradicted President Donald Trump by asserting the US would not target Iranian cultural sites amid rising tensions after a US strike killed Iranian military commander Qasem Soleimani.

"We will follow the laws of armed conflict," Esper told CNN Monday.

When pressed if that meant not targeting Iranian cultural sites, Esper replied, "That's the laws of armed conflict."

The comments come one day after Trump reiterated his threat to target Iranian cultural sites in a conversation with reporters aboard Air Force One.

The threats have been met with criticism because it is against international law to target cultural rather than military sites, and the US military's policy has long been to avoid striking areas of cultural importance.

I mean, more kudos to whoever this Esper guy thinks he is. Nobody ever heard of him, outside of the "let's make expensive planes that don't work" industry. He went from being some defense sector flunky to being the man in charge of the Pentagon precisely because he didn't appear on Trump's radar and cause himself to get fired. He avoided the sort of career-ending attention that the likes of Anthony Scaramucci could only fantasize about. It's hard to be a rando in the orbit of this president. He likes to lash out, and he likes to see people squirm when forced to praise him.

What happens next? Who the hell knows? We live in crazy town, and the mayor has no marbles left.