How Could This Be Any More Pathetic? 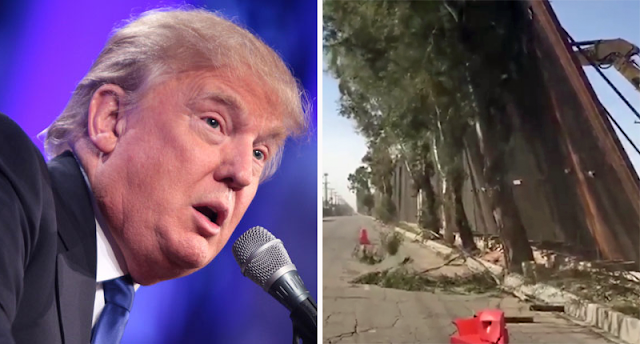 Part of the wall that Trump decided to build in order to keep out people who have a legal right to come here fell over in the wind because why the hell wouldn't it fall over?

Trump ordered the government to subvert the will of Congress and divert the money into building this useless monstrosity. We'll look back on these days and wonder, "how could people have been so fucking stupid?"

Trump is the stupidest person on the whole planet. When Fran Lebowitz said that you don't know anyone as stupid as Trump, she wasn't kidding and she was talking to the whole world. She was addressing all of sentient humanity, all the people around us, all the ships at sea and the planes in the air and those living under the ocean surface and everyone in the hills. She was talking to the human race en masse. Still the smarted commentary I've seen.

You really don't know anyone this stupid with this much power and an entire country just laying at his feet.

It's an embarrassment to be an American right now. It really is. We were supposed to be a country that wouldn't let this puffy, stumblebum of a leering jackass serve as a dog catcher, let alone a governor or a Secretary of whatever the hell. We were supposed to be a forward-leaning, competence-worshipping, you better do it the right way or you're out on your ass kind of a country. Nah, we're not that anymore. An ignorant, prideful minority got suckered by a guy who figured out how to manipulate the media. He and his crass minority of bit players found just enough apathy and votes here and there (thanks again, Russia) to make it so that we're going to be living in the gutter long after Trump is hurled out of office.

Take heart. Purely from a structural point of view, no one can get re-elected president by being consistently unpopular and completely under water. George Herbert Walker Bush got thrown out of office after winning a war and after being completely and utterly smart about virtually everything he did except the economy. Trump has built an illusory economy, one that will collapse when the Democrats take over because that's what Wall Street wants. We'll have to be ready for that, of course.

I mean, Trump's wall falling over is just a microcosm of how utterly useless he has been in office. A lot of people are going to vote to keep him there, no question about it. But the Blue Tsunami of 2018 is the thing to remember. If that many people plus a handful more turn out and vote, the Republicans are going to get a taste of something awful, and it will burn as it goes down.

I'm not paying as much attention as I should to the circus. Clowns are boring. They're not going to remove him from office. They should, and they know they should, but the Republicans in the Senate signed up for a defense of a man too goddamned stupid to build a wall that wouldn't fall over. They own every ounce of failure we've seen so far and all the things we'll be finding out about for the rest of our natural lives.
on January 30, 2020