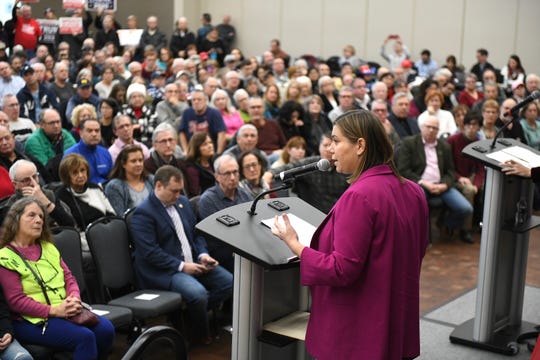 Representative Elissa Slotkin is going to put her political future in jeopardy and support the impeachment of noted criminal and stumblebum, Donald Trump:

The first-term congresswoman and former Central Intelligence Agency analyst supported an impeachment inquiry this year but had yet to voice her position on two articles of impeachment for abuse of power and obstruction of Congress. She decided to support the articles of impeachment over the weekend at her farm in Holly, she said.
During a raucous constituent meeting inside the Oakland Center at Oakland University, Slotkin said she would stick to her decision regardless of what happens politically "because this is bigger than politics."

The comments by the Holly Democrat were often drowned out by protesters, making it difficult for reporters and roughly 400 attendees to hear what she was saying. She opened her remarks — which were greeted with boos and applause — by saying she was glad to see such enthusiasm for civic engagement.

You're going to see more and more of this because the GOP is, frankly, out of ideas and has no way to defend the lawlessness of the Trump era.  There are only a relative handful of vulnerable Democrats in the House, and most of the Republicans holding seats that could lean Democratic have already announced their retirement. This is just their way of trying to staunch the bleeding.

Remember that Trump is extremely unpopular and has the worst approval numbers of any president in the modern era. Herpes and a day long excursion to the Department of Motor Vehicles are all polling higher than the idea of Trump remaining in his current position as the foolish master of a gangster administration that is well into using its own stash of brain-debilitating drugs. Democrats have to protect seats currently occupied by Elissa Slotkin, Abigail Spanberger, and Angie Craig of Minnesota.

These Democrats are going to be the subject of ad buys and negative coverage. The GOP is going to use money against them that would otherwise defend Republicans in seats that could be flipped next year (again, they're abandoning the party and running for the exits).  We need to support them and protect them wherever possible. Every Republican who supports Trump needs to be thrown out of office in order to protect our democracy. Every damned one of them.