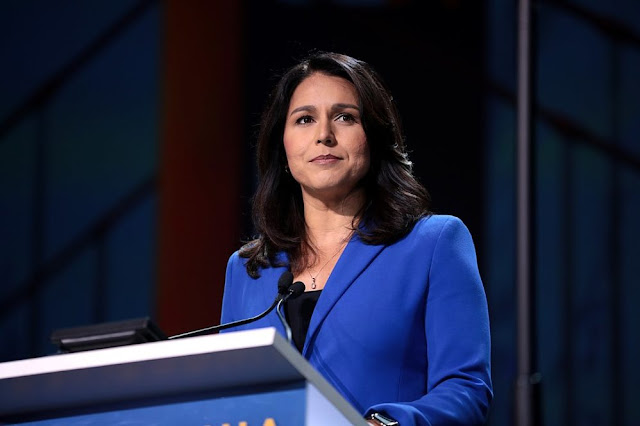 
Tulsi Gabbard has been slowly edging toward leaving the Democratic Party and, it now seems more likely than not, launching a spoiler candidacy to peel disaffected left-wing votes away from the Democrats. Her “present” vote on impeachment, followed by a disavowal of what she called the “zero-sum mind-set the two political parties have trapped America in,” sets the stage for Gabbard to play the role of 2020’s Jill Stein.

Left-wing anti-anti-Trumpism played an important role in the bizarre 2016 outcome. Die-hard Bernie activists, fired up with anger at the release of DNC emails stolen by Russians that purportedly showed the party had rigged the primary, demonstrated against the party outside its convention hall and tried to drown out the speakers inside with boos. Stein attacked Hillary Clinton from the left, then audaciously staged a grift-y fundraising scheme supposedly to hold recounts in the states she had labored to flip to Trump. Trump’s election appeared to deliver the same shock of reality that had vaporized Ralph Nader’s 2000 support.

But Gabbard’s emergence is another indication that the disaffection that drove these events has not disappeared. Anti-anti-Trumpism has maintained a small but durable intellectual infrastructure. The sentiments that first registered as dissent from the Russia investigation transferred to impeachment, and a chorus of left-wing voices is attacking the effort to remove Trump from office as at best a misguided diversion and at worst a deep-state coup.

Gabbard knows she can spend the next calendar year raising money from unsophisticated voters who were never going to give their money to a Democrat anyway. She knows that there is a segment of what the press calls "the left" that does not support Democratic Party candidates and actually leans more "socially liberal, fiscally conservative." These are people that will tell you that they want someone to do something about the housing crisis, but they better not do it in their neighborhood because they know someone on the County Board.

The Democratic Party has tried to appeal to these voters, and it always ends up going south on them. Contrary to what Twitter tells you, the Democrats get creamed when they move too far to the left, especially in a way that allows the Republicans to call them out on it. When Democrats find that sweet spot just to the left of center, they end up with Clinton and Obama. Yes, people do want the policies and governance that Democrats bring to the table. They just don't want you to tell them that they're voting for left wing policies.

Gabbard is one of those useful idiots who ended up getting elected because she could convince voters in Hawaii that she was one of them. In some part, yes, but in terms of being an actual Democrat, no.

Flash forward to the fetish that right wing nut jobs have for Gabbard and the rather useful segment of the electorate that pretends to be smart and doesn't know anything. These are people who are disaffected and don't trust the two party system. They may look and feel like liberals, but they draw the line at doing anything that would actually produce liberal policies for people in need. Think of anyone who acts in a contrarian manner, and can't stand the idea of actually being a part of something, and doesn't know a goddamned useful thing. They're not stupid enough to be libertarians, but stick around a week and they might.