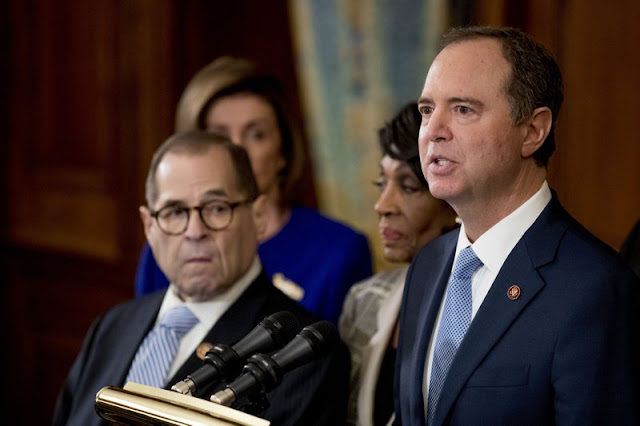 Never forget that Trump is a bum. A cheating, lying, stealing bum. He's the kind of bum that gives actual bums (who are usually down on their luck and doing the best they can) a bad name. He's a bum on purpose, you see, and that's the kind of bum that the American people want to see thrown out of office. He's never going to be presidential because he's just a goddamned bum, you see.

But, sometimes, I think the media is worse:

As Washington braces for this week’s expected vote to impeach President Donald Trump, partisan battle lines hardened on Sunday, with Democrats defending impeachment even if Trump isn’t removed from office and Republicans denouncing the integrity of the constitutional process.

The Democratic-controlled House planned to vote Wednesday on two articles of impeachment against the Republican president, and the decision whether to make Trump the third U.S. president in history to be impeached was expected to play out along party lines. There is some debate between the White House and GOP-run Senate about the contours of the Senate trial anticipated in January, but there seems little doubt the Senate would acquit Trump.

But a seemingly predetermined result has not convinced Democrats that their impeachment effort, which was prompted by Trump’s push to have Ukraine investigate a Trump political foe, was in vain. Framing the matter as a national security issue, the chairman of the House committee that led the investigation insisted it was “not a failure in the sense of our constitutional duty in the House.”

“This misconduct goes on, the threat to our election integrity coming up goes on,” said Democratic Rep. Adam Schiff of California, who heads the House Intelligence Committee. ``It’s a clear and present danger, I think, to our democracy, and not something that we can turn away from simply because the Republicans in the House refuse to do their duty, and continuing to put the person of the president above their personal obligation.”

There is only right and wrong, and Trump was so completely and utterly on the side of wrong it shocked people into risking their careers to stand up FOR THE COUNTRY. They stood up for the rule of law, the Constitution, and for the common good. They did it for you, and for me, and for future generations.

Framing this as a partisan thing is exactly the wrong way to approach what happened here. Trump is a bum who abused his power, see, and now he's going to be impeached for it. The day after they impeach Trump, he'll be back to committing crimes and abusing his power because Moscow Mitch is just fine with all of that.

The media should frame this as what happens when a crime syndicate seizes power and holds it. The media should correctly identify the Republican caucus in the House and Senate as the enablers and the accomplices to an ongoing crime spree. And this is, by all means, just the tip of what we know and a sliver of what has leaked out.

Think of all the crimes we don't know about yet that will shock future generations and will forever have people wondering why we weren't turning out by the tens of millions to lock down Washington D.C. and put a stop to all of this.
on December 15, 2019