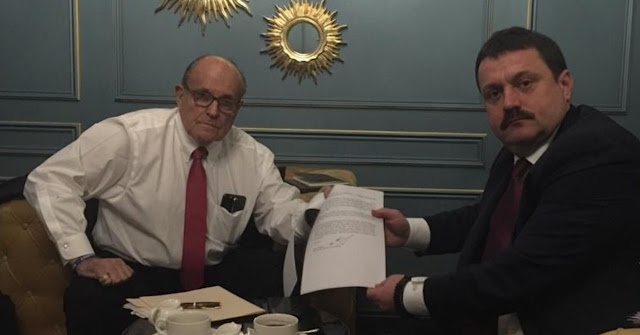 File this under the category, "you're not helping."

The Republican Party has long been a cult made up of people who believe in nothing but grievances. The fact that they are awful people who hate democracy and demonstrate willful incompetence has nothing to do with it.

If you look at Rudy Giuliani, he is resplendent in his obesity, refusing to take care of himself and moderate his intake of food and bullshit. His ridiculous phone is begging to fall out of his ill-fitting white business shirt, and is liable to butt-dial virtually anyone when it hits the floor.

Trump's party is doubling down on the idea that they are going to be beaten in 2020 unless they cheat. And, if they cheat, and get caught, there will be no consequences. The pardons have likely already been written. The media has already let them off the hook.

Imagine if every news outlet were to reinforce the idea that Trump should be impeached AND denied a place on the 2020 ballot specifically because of what Giuliani is doing as we speak. Some people disqualify themselves from public life through their actions. If there was any shame left in these grifters, they would have left town years ago.
on December 05, 2019