Unpopular President Treated Like Pariah at the Old Ball Game 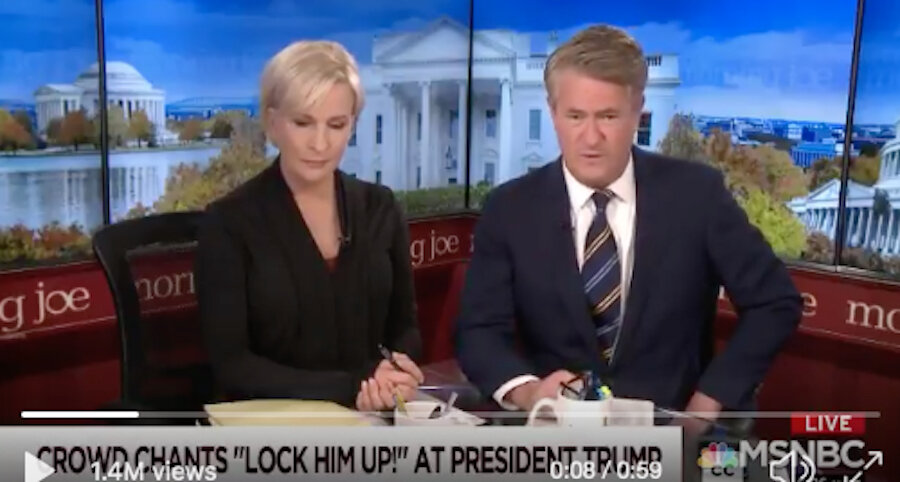 Joe Scarborough failed to note that Trump is exceeding unpopular and universally disliked in his predictable plea for civility. Our moneyed elites who work in the “professional” media are concerned that they will soon be tormented and eaten by rabid mobs, I guess. Their walled compounds are staffed with people who have questionable motives and poor decision making skills. I don’t know when the end will be, but perhaps Mr. Scarborough and his trusted blonde companion know how things are going to shake out. They probably have a place in the Bahamas all picked out when the balloon goes up.

He also failed to note that the crowd at the Washington Nationals game was primarily made up of people who, individually, had more than $800 in disposable income to spend on a World Series ticket. That translates to a really interesting breakdown of the demographic of people who hate Trump. I hope they have a bug-out plan ready as well.

First, these are not poor people.

Second, they are actually pretty wealthy and many probably benefited from the Trump tax cut.
Third, they can say whatever the hell they like because there is still a First Amendment in this country, whereby each person in the stadium can actually catcall the head of state and not face immediate repercussions for their actions.

This actually spells electoral disaster for Trump. A good number of the people who booed him were from Northern Virginia, a state that he has to win if he wants to be re-elected. These folks weren’t having it. Something about locking up babies en masse does that to an enlightened society.
I would say that there were more than a few suburban voters, and if they came from far and wide because their personal wealth allowed them to get tickets, then what does that say about Trump’s support as a Republican? If rich people hate him that much, I’d say that it means he’s in trouble.
on October 28, 2019