Trump Has Ties to the Russian Mob 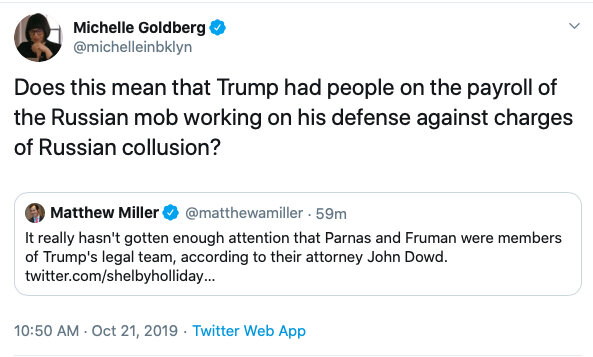 You can’t put too fine of a spin on this. As we learn more and more about Rudy Giuliani’s use of Lev Parnas to help with Trump’s defense as it relates to the Mueller Report, it should start to dawn on every Republican who wants to have a future in politics that they need to cut their losses.

A year or so of a President Pence would mitigate a lot of the damage, given the short attention span of the American people. Pence could never get elected himself, nor could he mount much of a defense against his association with Trump, but it would go a long way’s towards normalizing the two-party system to dump Trump now as opposed to waiting to see what a tornado-driven shit-storm the actual 2020 election will be if Trump is the GOP nominee.

This thing could be done quietly over Christmas. Oh, it’s January, and Trump is gone? He wrote himself and his associations a flurry of Christmas Day pardons and then a semi-truck backed up to the White House and took his belongings to Florida? Well, okay then.

Not that I believe that would actually happen. It will take three hundred men in body armor to remove Trump from the White House in January 2021. A Democrat will have to wait until the residence is cleaned out and restored to livable conditions. New toilets and all that, you know. But still.