Remember When They Would Deny This Even Happened? 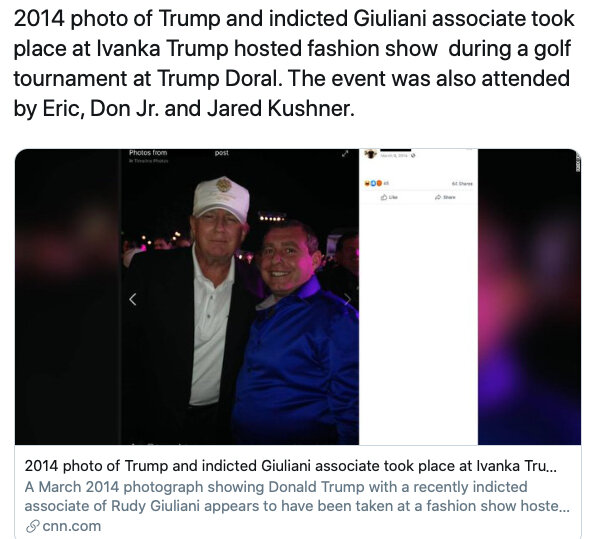 There was a time when Trump and the people working for him would deny that this sort of thing even happened. There were always denials, and they have turned out to be complete and utter lies.

1. July 26, 2016: "I mean, I have nothing to do with Russia. I don't have any jobs in Russia. I'm all over the world but we're not involved in Russia," Trump tells CBS4.
2. July 26, 2016: "For the record, I have ZERO investments in Russia," Trump tweets.
3. Oct. 6, 2016: During the second presidential debate, Hillary Clinton says Russia is trying to help elect Trump, "maybe because he wants to do business in Moscow." Trump calls this assessment "so ridiculous," adding, "I know nothing about Russia ... I don't deal there."
4. Oct. 24, 2016: "I have nothing to do with Russia folks, I'll give you a written statement," Trump says at a campaign rally.
5. Jan. 11, 2017: Trump tells reporters that he has "no deals that could happen in Russia because we've stayed away," adding that he could "make deals in Russia very easily" but "I just don't want to because I think that would be a conflict."
6. Jan. 11, 2017: "Russia has never tried to use leverage over me. I HAVE NOTHING TO DO WITH RUSSIA - NO DEALS, NO LOANS, NO NOTHING!," Trump tweets.
7. Feb. 7, 2017: Trump tweets, "I don't know Putin, have no deals in Russia, and the haters are going crazy."
8. May 11, 2017: Trump tells NBC News that he has "nothing to do with Russia," other than the fact that he "sold a house to a very wealthy Russian many years ago" and hosted the Miss Universe pageant there once.

Each and every one of those denials was delivered over two years after Trump had his picture taken with Lev Parnas in 2014. These denials were used to deflect criticism from Trump and his campaign for the presidency. They were used to throw investigators and reporters off of his trail in the early months of his “administration.”

We take it for granted now that Trump has seedy and illegal ties with people from Russia, or from that part of the world, or from a vast underbelly of criminal contacts that has links to Russia and its kleptocracy. I guess we now have our own kleptocratic government, and it never seems to register with the American people.

Trump is a straight up dirty criminal gangster. He’s got his head buried in the Russia mafia’s ass. Hello, Trump has business ties with Russia that are being used to manipulate and control his behavior.

Is this thing on?