Jared Kushner is a Hero in His Own Mind 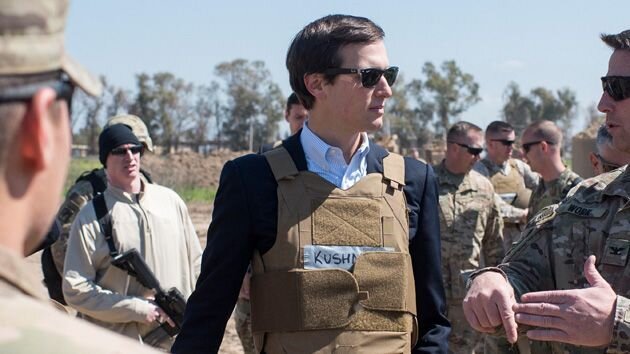 You have to admire the balls on this fucking guy:

Just when you were wondering whatever happened to Jared Kushner, the White House adviser who got his job because his father-in-law is President, he popped up on an Israeli TV station on Monday to jab at the Democrat who may be on the ballot opposing President Donald Trump in 2020. He said he's been busy cleaning up "the messes" that former Vice President Joe Biden was supposedly responsible for creating related to the Middle East and criminal justice.

Kushner's simplistic take sheds little light on the two issues he named, but illumination was not the point. No soundbite could ever help anyone understand the problems he pointed to. Instead, Kushner was obviously trying to distract us from the worsening impeachment crisis that has enveloped the administration, and to impress the Oval Office occupant.

Oh, there were lots of “messes” to clean up, I’m sure. As in, there were numerous American policy initiatives that were well underway and were subject to ongoing policy processes that Trump and his band of vandals dismantled and destroyed the minute they took control of the Federal government.

Kushner is so entirely out of his depth that it is impossible to overstate just what a travesty it is that he is involved in American foreign policy. The decision to hand him anything resembling a portfolio is a farce in and of itself. He is an incompetent dilettante and will be jailed like all the rest of them when the law catches up to Trump world. The term “lightweight” is simply not severe enough to accurately describe this wretched little man. Oh, and then there’s his wife, holder of numerous Chinese patents.

What a reliably awful family they make.