China Should Start an Investigation Into the Bidens 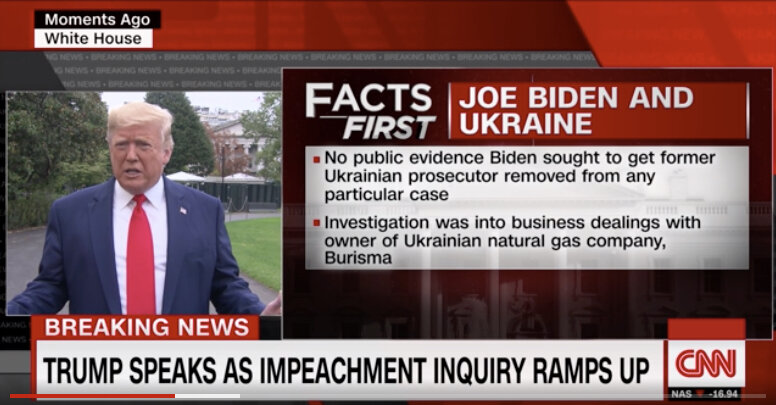 President Donald Trump told reporters at the White House that he wants both Ukraine and China to investigate Joe Biden and his son, Hunter Biden. He said he hasn't yet asked Chinese President Xi Jinping to look into the Bidens, but he will start "thinking about it."

So, the United States government has been completely destabilized by a Republican President who is being enabled by a terrified handful of Republican senators. There is no GOP presence in the House anymore—they have been utterly destroyed by their own fecklessness and incompetence. The “Texit” of GOP House members has reached six, and will increase exponentially as other state delegations realize that they’re going to be creamed in next year’s election.

It’s horrific to hear anyone speak the way Trump does about his political opponents. You can’t imagine a similar discourse in any other context because one has never existed. It’s all batshit crazy right now, and if you wrote a novel that mirrored how we are living our lives right now, someone would throw it at your head and put you out on the stoop.

I mean, you can see the obstruction of justice sausage being made in real time right in front of your eyes. There is no need for an investigation. There’s no need for anyone to start building a case file, other than a simple folder on a desktop marked TRUMP OBSTRUCTION TWEETS N VIDEOS. Jeez, Republicans. So glad you went out on that limb this past week and defended the hell out of Trump right before he sawed the damned thing off on ya.

Vice President Joe Biden, and each and every former President and Vice President, should universally condemn Trump and his remarks. This is no time for the Obamas, Bushes, Clintons, Carters, or Al Gore to remain silent in the face of the destruction of our political norms. And, yes, we need to hear from Vice President Walter Mondale and from Dan Quayle and his wife on this, too. There are more living ex-Vice Presidents than Presidents, and they should all speak with one voice at this point in our history. Their denunciation of Trump should be swift and complete. And, no, you won’t hear from Dick Cheney when it comes to standing up for decency or the American way.

If you’re not condemning Trump at this point, nobody should plan on showing you any respect ever again.