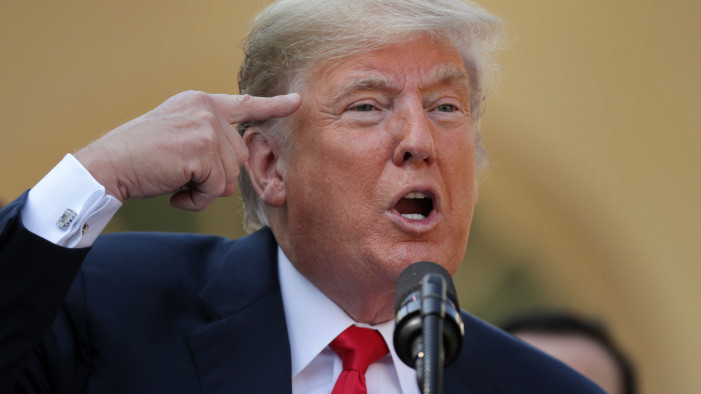 These are just the latest things that our crazy president said today:

President Donald Trump on Sunday escalated his rebuke of the anonymous whistleblower at the center of the mounting Ukraine controversy after House Democrats launched an impeachment inquiry against him, asserting that he deserves to "meet my accuser."

"Like every American, I deserve to meet my accuser, especially when this accuser, the so-called 'Whistleblower,' represented a perfect conversation with a foreign leader in a totally inaccurate and fraudulent way," Trump tweeted before taking aim at House Intelligence Committee Chairman Adam Schiff who confirmed earlier Sunday there is a tentative agreement for the whistleblower to testify before his committee.

"His lies were made in perhaps the most blatant and sinister manner ever seen in the great Chamber. He wrote down and read terrible things, then said it was from the mouth of the President of the United States. I want Schiff questioned at the highest level for Fraud & Treason," Trump said.

This is not an “escalation” of a “rebuke.” This is actually witness intimidation and obstruction of justice. What we’re witnessing is proof that the media can’t cover Trump because they’re not equipped to analyze what he’s saying and reach the proper conclusions. These are still statements by the President of the United States of America, and they are dutifully bound by the rules of journalism to issue reports to the American people about what they president has said in as solemn and as respectful a manner as possible.

The man is stone crazy. He’s threatening people with death. Whenever he says “treason,” it means he thinks the person who committed an imagined transgression against him should be executed.

Everyone knows Trump is crazy. Every Republican who enables him is as much a part of the problem as Trump himself. They are paralyzed with the fear of losing power and influence to do anything about it. What should happen is that the Republicans should get together and say, “what’s good for the country? Removing him from office and throwing him out of the party? Okay, let’s do it.”

They are too compromised. There is no escape hatch. They are bound to the mast of a sinking ship, and all the knives went overboard years ago.

America’s only hope is to systematically throw every single Republican out of elective office as soon as humanly possible.