The World Around Us is Burning 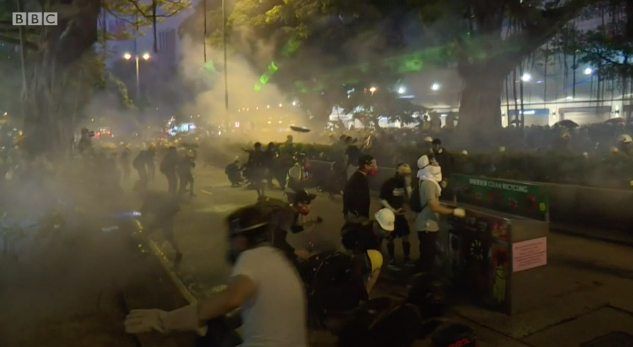 I’ve struggled over the last few days to figure out how to adapt to the way the news is hitting us, and to the relentless pace that I’m sure other are struggling to cope with. The news moves so quickly now, and it is moving from outrage to horror and back again.

As we watch Trump’s mental decline in real time, there are events unfolding in Hong Kong that would normally be front page news, and would engage much of our State Department’s time and energy if we actually had one that was fully staffed and functional:

Hong Kong police have once again clashed with anti-government protesters as the city enters its 10th week of mass demonstrations and unrest.

Police fired tear gas across the city on Sunday night, including into an enclosed railway station.

In the Wan Chai district, petrol bombs and bricks were thrown at riot police who responded by charging at protesters with batons.

A number of people, including a police officer, were injured in the clashes.

Police were also filmed firing rubber bullets at close range inside a subway station, while other officers were seen beating people with batons on an escalator.

Two months of demonstrations sparked by a controversial extradition bill show no signs of abating, with both sides hardening their stance.

The Chinese government does not tolerate dissent of this nature for very long. The fact that it has continued on a slow burn for months indicates that there is likely going to be a repressive crack down that will eliminate the problem. They are not going to move until they are ready to crush the dissent. Have there been unreported arrests and fatalities? I would imagine so, but it’s difficult to say because there is no free press anywhere in China. There is a tradition of it that might still exist in Hong Kong, but who knows what is left of it.

Without a functioning State Department, we are watching events like this without having the benefit of knowing what is actually happening. There is no way the current Secretary of State could rise to any occasion such as this—Mike Pompeo is simply too inexperienced, ideological, and hamstrung by Trump’s focus on North Korea and Iran.

One of these weekends, everything in Hong Kong could explode—the repression that is coming could take any form imaginable, up to and including mass murder or mass arrests. We are not engaged and we are not involved in helping to prevent that, and this is why Trumpism is so dangerous. It leaves us outside of world events, and incapable of being a part of the solution to difficult problems.