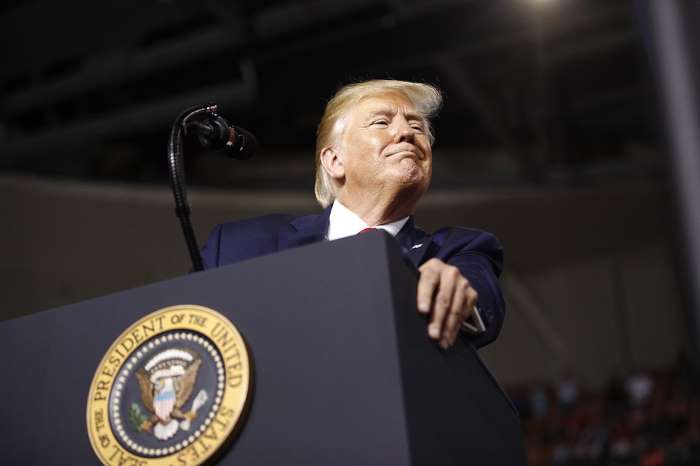 These are the words of a strongman trying to dictate terms to the people he controls:

“I won the election, the markets went up thousands of points, things started happening,” Trump said at a rally here. “If, for some reason, I were not to have won the election, these markets would have crashed. That will happen even more so in 2020. You have no choice but to vote for me, because your 401(k), everything is going to be down the tubes.”

“Whether you love me or hate me, you have got to vote for me,” he added.

Trump, appearing at his first campaign stop in New Hampshire this year, delivered a wide-ranging speech lasting more than 90 minutes that addressed Hillary Clinton’s emails, eradicating the AIDS epidemic and the prospects of the nearly two dozen Democrats running for president against him.

“You’ve got Pocahontas is rising. You’ve got Kamala, Kamala is falling. You’ve got Beto, Beto is like, gone. We’ll see what happens. Whoever it is, I don’t know that it matters,” Trump said, referring to Sens. Elizabeth Warren and Kamala Harris and former Rep. Beto O’Rourke, before turning to former Vice President Joe Biden: “I think Sleepy Joe might be able to limp across the finish line, maybe. … I sort of hope it’s him.”

No American president would speak that way if he thought that his own party would abandon him. The Trump era is more than half over, so let’s prepare ourselves not only for the end of Trumpism but for the establishment of a rule that should be hard and fast in American politics. If you worked for Trump and supported his agenda, you don’t get to be a part of the future. You’re not welcome in polite society. Fuck off.