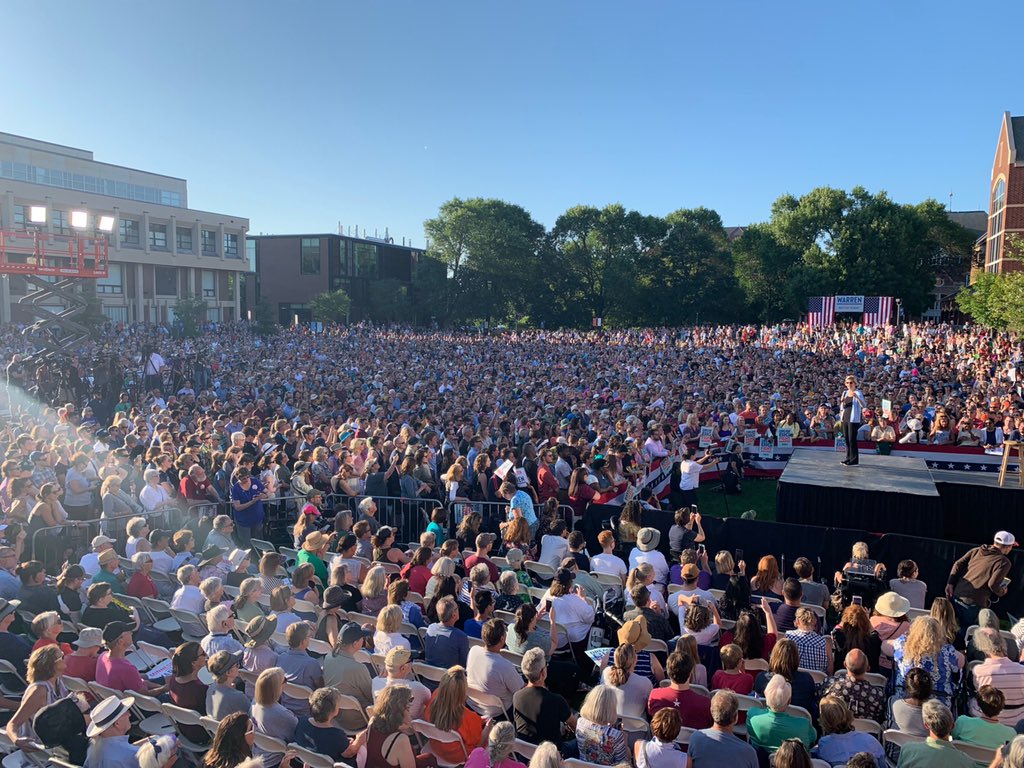 On a Monday night, about fifteen months before the next presidential election, you have Senator Elizabeth Warren standing in front of 12,000 people who are there to hear her talk about policy and the future. You have the enthusiasm that will carry us forward, and allow the Democratic Party to regain control of these things — democracy, this country, the presidency, decency and the moral high ground.

When President Obama caught fire with the people in 2008, his rallies looked like this. People were tired of the Bush presidency. They were tired of war, economic chaos, and incompetence. The electorate, right this minute, is sick to death of the wildly unpopular racist presidency of Trump and they are eager to throw his ass out of office.

It’s hard to overstate just how awful Trump is at governing, but there you have it. The cruelty and the racism go hand in hand. Turning a blind eye to the defense of the country is unforgivable. Let’s not forget the widespread corruption, the relentlessly inhumane policies, the indifference to the dying of the planet and the kind of stumblebum incompetence that only a Republican could enjoy make up the bulk of what we see every day. These are the hallmarks of a failed presidency.

Trump is in a special category of failed president. He will become persona non grata when it is all over, and someone like Elizabeth Warren will have to spend the majority of their time in office undoing all of the damage that has been done. You will go the rest of your life and the only people you will meet who will admit to voting for Trump will be the proud racists who can’t stop gnawing on their own hands once their straitjackets come off.

But, like I said, this is what you want to see. Enthusiasm, engagement, and a desire to connect with a candidate. This is a well organized campaign event months and months out from any real engagement would be expected from the voters. Warren’s campaign staff were able to put this together, and give her the biggest audience to date, if

Just so we’re clear, I will vote for the Democrat in 2020. It may not be Warren, and it may be a ticket that I don’t currently support. I will vote for it, enthusiastically.

As of right now, I don’t know who I’ll be voting for in the primary.