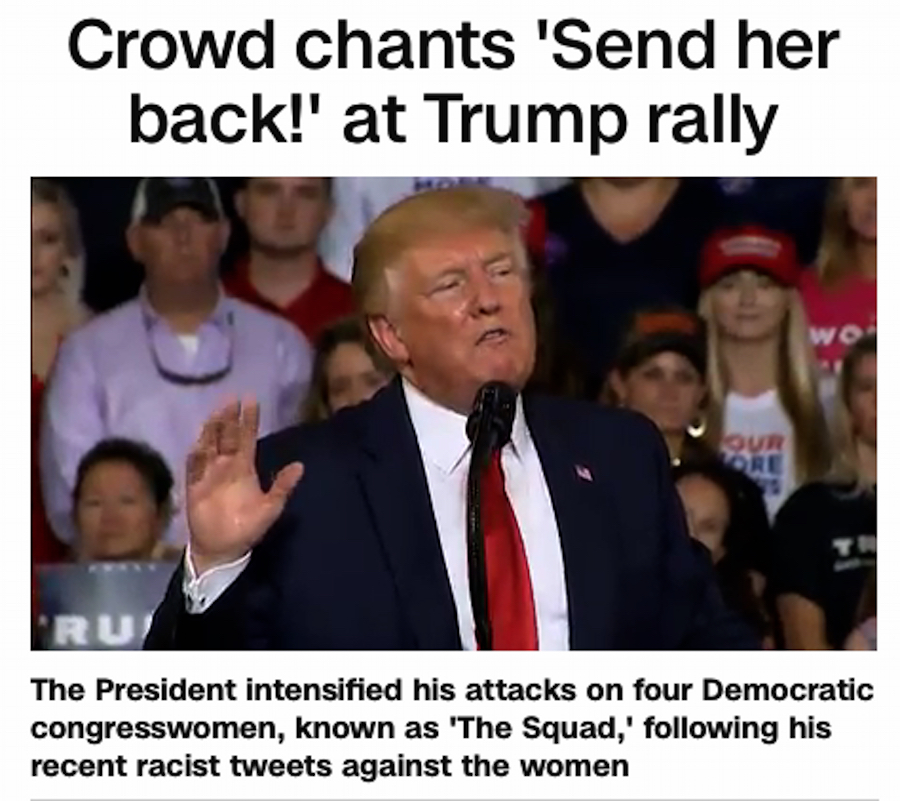 There is something far more insidious than mere campaigning going on here:

President Donald Trump on Wednesday intensified his attacks on four progressive Democratic congresswomen, painting them as the face of the Democratic Party -- as a fevered crowd chanted "Send her back!" about an American congresswoman of color.

Trump spent a significant portion of the rally railing against the group, known as "The Squad" on Capitol Hill, individually by name. That line of attack has become a strategy he and aides believe will cast the Democratic Party as a far left, radical group.

Trump is not merely running for re-election. He’s normalizing the criminalization of the act of opposing his policies.

Really, it’s not that difficult to figure out. He has the Justice Department violating all precedents and he’s shutting down any investigation that he can get his hands on. He has ended the normal back and forth of oversight and compliance with the House of Representatives, creating the very real possibility that, one day, a Democrat is going to tell a Republican House Committee Chairman to go pound sand (relax, oversight only applies to Democrats—this will never be allowed to happen). And now he is making it so that women of color who were elected to the Congress of the United States of America are now targets for his unhinged wrath.

I think of this young woman Ilhan Omar, and I wonder why people don’t grasp the fact that she is a duly-elected Member of Congress. She has every right to be treated with the level of respect due to someone holding her office, and that’s not happening here. This is proof that there is institutional racism as well as the dogwhistle racism practiced by Trump and his followers. No one has really grasped that Omar should be treated with respect because we have witnessed Trump’s normalization of treating his opponents like criminals with no rights or due process.

Democracy itself is dying and nobody can do shit about it. Don’t lay this at Nancy Pelosi’s feet—the House could impeach Trump twenty times over for everything on paper and it wouldn’t make a damned bit of difference because this Senate will not hear the charges nor would it convict him and remove him from office. Impeachment would rally the GOP even further. The only Pelosi has failed to do is tell everyone what people at her level already know—Trump is in the throes of dementia and no one has the courage to do the right thing.

That leaves us to watch the horror unfold, in real time, of a country being torn apart by a madman. A handful of Republicans could put the country first and stop this but they won’t. The bastards.

We need to bear witness to what they are doing and write everything down and record it. We need to know who embraces fascism and the end of America’s limited model of government. And then we have to vote in November 2020 and end the Republican Party as a force in politics. We need to defeat Trump and throw as many Senators out of office as humanly possible. And then we need to keep doing that for the rest of our natural lives.

There is no bottom with Trump. This will get worse before it ever thinks about getting better. But it will end, and it will end with everyone deciding that enough is enough.