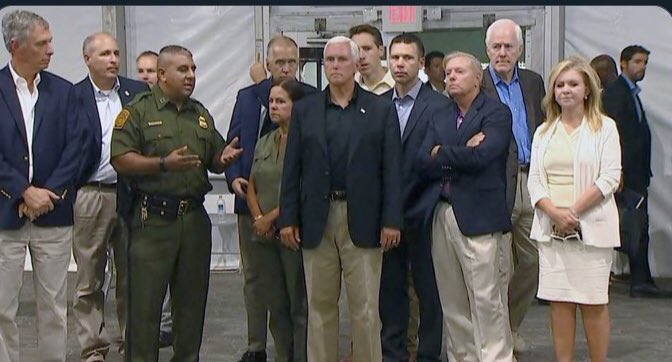 This is The Squad we should all be talking about.

If you can read body language, what this photo tells you is that they are normally a smiling bunch of right-wing politicians. They are used to spending all of their time glad-handing people and begging for money. There is no one here that can give them any cash. They can’t use this appearance to leverage others to do things for them.

This is the look of a group of people who are trapped.

This squad is here for the horror of watching human beings beg for dignity. These people are living it, breathing it, smelling it, and they can avert their cowardly eyes all they want but they are witnesses. They have agreed to a boondoggle. A free ride on Pence’s plane, a promise that they will have a nice dinner tonight and raise funds for re-election (not sure, but why would Pence even fly to another part of the country without tying it to campaigning?). Any time you appear in public with the Vice President of the United States, it’s a chance to burnish your credentials.

Do you see anyone looking like they are proud to be Americans?

Do you see the horror on their faces?

What do you think they’re going to tell their loved ones about the time they road on Air Force Two?

The companies who run these facilities, by the way, give campaign contributions to Republicans. The people in this picture are actually taking money from corporations that are taking Federal funds to run the facilities where asylum seekers are being held. Think of how that spreads even more corruption and greed through the country and its soul.

In the fall of 2020, every one of these people should have ads run against them in their states and districts, their home towns, the places where they represent. These ads should depict them as willing accomplices to the atrocities of the Trump Regime, committed against people legally requesting asylum in the United States. Crimes are being committed here. These are the witnesses to those atrocities. They are now tied to Trump, inextricably, forever and ever. There should be no post-Trump career for anyone in this photograph.

It is fitting that the men are stripped of their ties here. Their authority is non-existent, their decency and their honor means nothing, and the power that comes with wearing a tie has been removed along with their dignity.