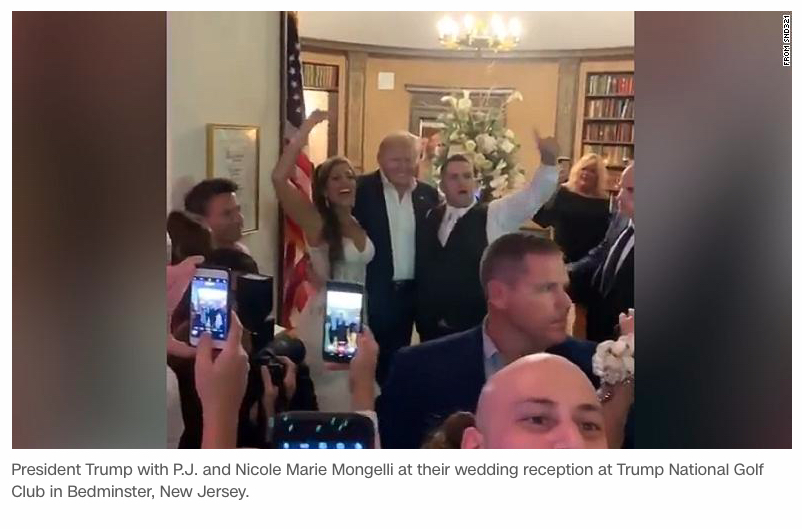 This is how we live now:

President Trump popped into a wedding reception at his golf club in Bedminster, New Jersey, on Saturday night, prompting the bride, groom and guests to chant, "USA! USA!"

"It was a complete and utter surprise," Mongelli said.

Mongelli said he asked the President for a favor -- to greet the guests at the reception.

Video posted on social media showed Trump, wearing a dark suit but no tie, standing in a doorway and waving to the cheering crowd. The President motioned for the newly married couple from Staten Island to approach and they stood on either side of him, pumped their fists and led the chant, "USA! USA!" the video showed.

"He was such a gentleman," Mongelli said. "He was aces."

Mongelli said he and his wife are both strong Trump supporters, as were most of the wedding guests. The couple got engaged at the golf club in November 2017, he said.

The President was staying at Trump National Golf Club in Bedminster over the weekend and returned to Washington on Sunday.

All of the racist things Trump has said over the last week have been forgotten. It all goes down the rabbit hole. No one points out that Trump has been hiding away in New Jersey because, well, he’s unpopular and has had a terrible week. If this is what counts for leadership, it would be nice if people finally acknowledged their own racist beliefs and their undying support for a white nationalist.

Shouting “USA, USA” at a man who just told women of color to leave the country is pretty fucking racist, if you ask me. Showing him the wink and a nod and supporting him in this way should not be excused as merely being “patriotic.” No, in the context of what Trump has done this week, it’s racist as hell and these people should be ashamed of themselves. They’re showing Trump exactly how they support his message and condone what he’s been doing this past week. What a country.

Trump is ripping the lid off of hate and nationalism, and he’s using it to further his political agenda. The media is along for the ride, refusing to acknowledge what we all know—Trump is ready for Americans to kill other Americans if it helps him hold onto power.

But, let’s unpack this further. Trump is, once again, promoting his own property and his own business interests by appearing at this reception. Is it appropriate? No, it wasn’t the first time he did it nor will it be reasonable or right to do it again. Trump’s post-presidency activity will likely be one long grift, trying to promote properties that are headed for oblivion because decent Americans won’t appear anywhere near them.

Why is he in New Jersey, anyway? What’s going with that? Couldn’t he at least make an attempt to do something that doesn’t cost millions of dollars in taxpayer funds every damned weekend?