An Abundance of Talent and Competence 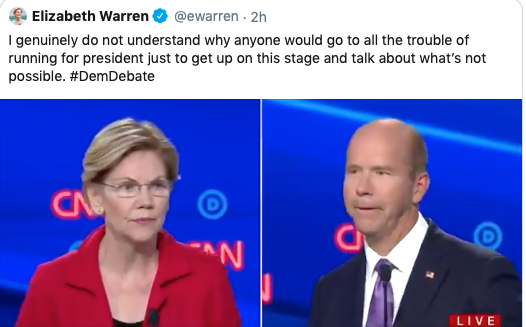 So, we had another debate tonight, and I liked more of the candidates than I probably should. I really wish some of them would drop out and run for the Senate, but oh well. If I had to pick a winner, it was clearly Senator Elizabeth Warren. She was fierce and she has a plan for that. And the lesson here is, “don’t show up to a debate and tell everyone we can’t do anything for the American people.”

This was one of those standout moments for me, a chance to signal to people that the Democratic Party is ready to engage the GOP on all fronts. Elizabeth Warren is visibly annoyed at having to tell John Delaney to think a little bigger, but oh well.

There is so much talent in each of the Democratic debates. The moderation is awful, the format is worse than awful, but you get a sense that there are at least seven or eight candidates who could actually be president. There are a lot of Martin O’Malley’s out there, candidates with good resumes who just aren’t going to break out and catch a second look. Delaney isn’t even one of those, I’m afraid. But he has the “we can’t do shit so why try?” vote locked up.

In the first ten minutes of each of the last three Democratic debates, we have seen more ideas, more honesty, and more decency laid out in front of the American people than they will ever get from Trump. The A-list Democrats are ready to make their case and it’s a pretty compelling one—do you want to continue down the path of ruin? Do you want more of the same shit sandwich that’s been served open-faced while Trump and his minions have been stealing the country blind or the possibility of living in a decent country again?

What do the people want? More racism, more coddling of dictators, and more insanity? Come on. Who would want more of what we have seen? Only a sadist or a regular commenter at Breitbart.

That Trump guy sounds like an unpopular asshole, if you ask me.