Trump Committed All of Those Crimes 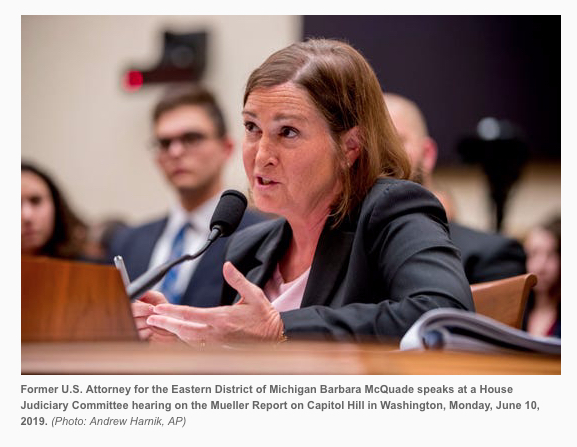 I like it when actual legal experts testify before Congress because they tend to say things like this:

Although Mr. Mueller’s investigation did not establish the crime of conspiracy against the Trump campaign under federal statutes, proof of an underlying crime is not required to prove obstruction, because it is the interference with the search for the truth that the law prohibits.

And let’s not forget that the investigation did establish sufficient evidence to charge 37 defendants with crimes, including Russian intelligence officials.

That’s despite the fact that some people, including the president, refused to talk to Mr. Mueller, lied to him, used encrypted messaging apps.

We don’t know what he would have been able to find if not for that kind of obstruction.

The report identified possible motives animating the president’s conduct, all of which would legally support obstruction charges.

Trump committed so many crimes, there’s never going to be a full reckoning. He told people to go out and commit crimes on his behalf, and we have it on the record that they ignored the orders given to them by the President.

When Republicans look at the current regime occupying the White House, they go out of their way to excuse the things that Trump has done because they know the media will never call them on their hypocrisy. The media will give them a pass, always and forever. In three years, there will be Republicans on your TV every day and every night, screaming about some arcane violation of the law committed by whoever is in the White House if they are a Democrat. And the media will go right along with it and make the case that whoever gets into the White House after Trump is “just as bad” or “the same as” or “equally guilty of corruption.”

And it’s all bullshit, of course. No one is going to pay attention to McQuade or her statement unless they value the rule of law and want justice to be done. That is not going to happen until a real Special Counsel is appointed in January, 2020.

A real Special Counsel would have actually interviewed Trump, documented all of his lies, and compared them to everything that the witnesses had to say. That’s the real piece that’s missing. There should be a one for one match for everything Trump did to obstruct justice. Side by side, we should have what Don McGahn had to say and then Trump’s lie or denial next to it. We don’t have that because Robert Mueller III didn’t finish the job.

Was that his fault? Was he fired before he could interview Trump? Or did he give into demands that he not interview Trump and expose him as walking, talking perjury trap in fat pants?

Here’s a great question for all of the Democrats running for president. Who are you going to pick to investigate what really happened between Russia and Trump, and will you finish the job if given the time and resources to do so?